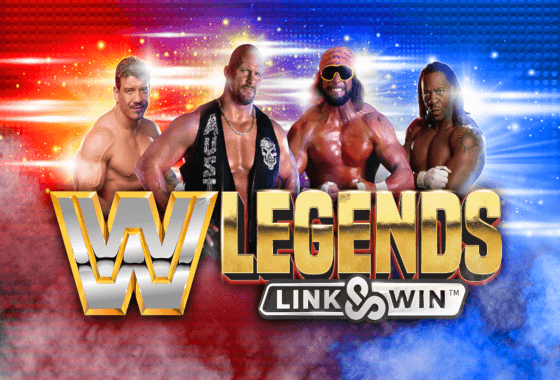 WWE Legends Link & Win Online Slot by Microgaming and All41 Studios brings you all the excitement and spectacle of pro-wrestling with some of the most iconic athletes ever to feature in the ring. Commentators and action video clips keep the action going with quips whenever you land a special feature and the reels are backed by a packed arena of eager fans.  Grab golden tokens to trigger a wave of potential winnings and take control with the game’s special features that include free spins and wilds.

If you land a non-winning spin, you have the chance to redeem yourself with the Hyperspins feature that allows you to respin individual reels to land the combo you are chasing or trigger a bonus feature. Each respin costs you an individual wager that costs you more depending on the likelihood of the reel respin producing a combo or special feature.

Landing 3 scatters anywhere on the reels will award you 4 free spins and the 3 middle reels will combine into a single reel that features giant 3x3 mega symbols that offer boosted winning potential. The feature can be retriggered by landing 3 more scatters.

When 6 or more coin symbols appear on a single spin, they will become sticky and you will receive 3 respins of the remaining reel positions and any new symbols that appear during the respins will reset your respins to 3. You could also land jackpot coins that will award you the Mini, Minor, or Major jackpots that pay 50x, 100x, or 1,000x your stake, respectively. You can win the Champion jackpot if you fill the entire grid with coin symbols and 3 additional modifiers could also appear while the feature is active.

The Multiplier adds +1 to your win multiplier every time it appears, the Collector combines all the values of the coins on the reels and adds that number to its own value, and the Payer adds its value to that of all the other coins on the reels.

WWE Legends Link & Win has a fun-packed theme and great winning potential. Even casual fans of wrestling will be delighted by the combination of the authentic visual theme, video clips and running commentary that creates a high-octane experience. The game’s maximum potential of $500 000 is buried in the Link & Win feature if you can fill the grid with coins and build up a high enough win multiplier. Some wrestling-themed features would have given the game an extra edge but overall it is a title that will keep you entertained.

If you like this slot, then check out Arena of Gold or Diamond Force