Features Facebook Or Insta, Netflix Or Prime: Which Media Couldn't Americans Live Without?

Facebook or Insta, Netflix or Prime: Which Media Couldn't Americans Live Without?

We’ve all been there before. Flicking through hundreds of television channels, only to declare that there’s nothing on. Complaining that the radio never plays our favorite bands, even though the internet lets us listen to them whenever we want. Scrolling through different social media news feeds, just to make sure we don’t miss out on a friend’s holiday photos or a particularly funny meme. The truth is that we’re spoilt for choice, but what if it wasn’t this way?

What if we could only watch one television channel? Or listen to one genre of music? Or only use one form of social media? In an age where we’re overloaded with choice in pretty much every aspect of life, some people may even find that restriction quite refreshing. Others will bemoan the lack of freedom, particularly those who regularly like to try new things.

We posed a series of hypothetical questions in a survey to see where people’s loyalties lie in the modern world. We took some of the most significant aspects of 21st-century society, from smartphone type to music genre. We asked our participants that if you could only live with one form of something for the rest of your life, which would you pick?

Answering these questions can’t have been easy, but our respondents managed to come up with their definitive answers. The infographic shows how loyalties are spread across different brands and genres. Some of the results are surprising, while others may be less so. While we are unlikely to ever have to make such choices in the real world, the answers to this survey give an indication about what might happen if that scenario ever came to pass.

The brand categories were claimed by Apple, Facebook and Netflix. These were also three of the most convincing winners, demonstrating the influence that brand loyalty can have on making decisions. These three all inspire repeat custom from users; many Apple owners exclusively buy Apple phones when they upgrade, Facebook essentially has a never-ending news feed, while Netflix is a literal subscription service.

Crucially, each of those three also have ways to ensure that customers are being treated to something new. Apple is often at the forefront of technological innovation, most recently demonstrated by the arrival of AirPods. Facebook adds new features regularly, although its real strength is its user base that keeps feeds filled with new posts and pictures. Netflix have a constantly expanding library, with the company now also a heavyweight in the world of television production.

The value of brand loyalty

While these are three of the biggest companies in the world, businesses of all statures and industries can take note. The simplest way to create brand loyalty is to offer a service that is too good to ignore. However, that service must be in a constant state of improvement. If one company fails to improve a product, then another company will seize the opportunity to grab its share of the market. This is why games are being constantly developed and updated to ensure they remain as exciting as possible, and why food companies are always looking for ways to take a product's taste to the next level.

Apple, Facebook and Netflix were ultimately the expected winners in their respective categories. Apple’s dominance in the smartphone market is reflected in their sales figures, although it is interesting to see that those fond of video games were over three times as likely to opt for Samsung. Samsung was also the most popular category for 18-24-year-olds, pipping Apple by 34.4% to 33.4%. 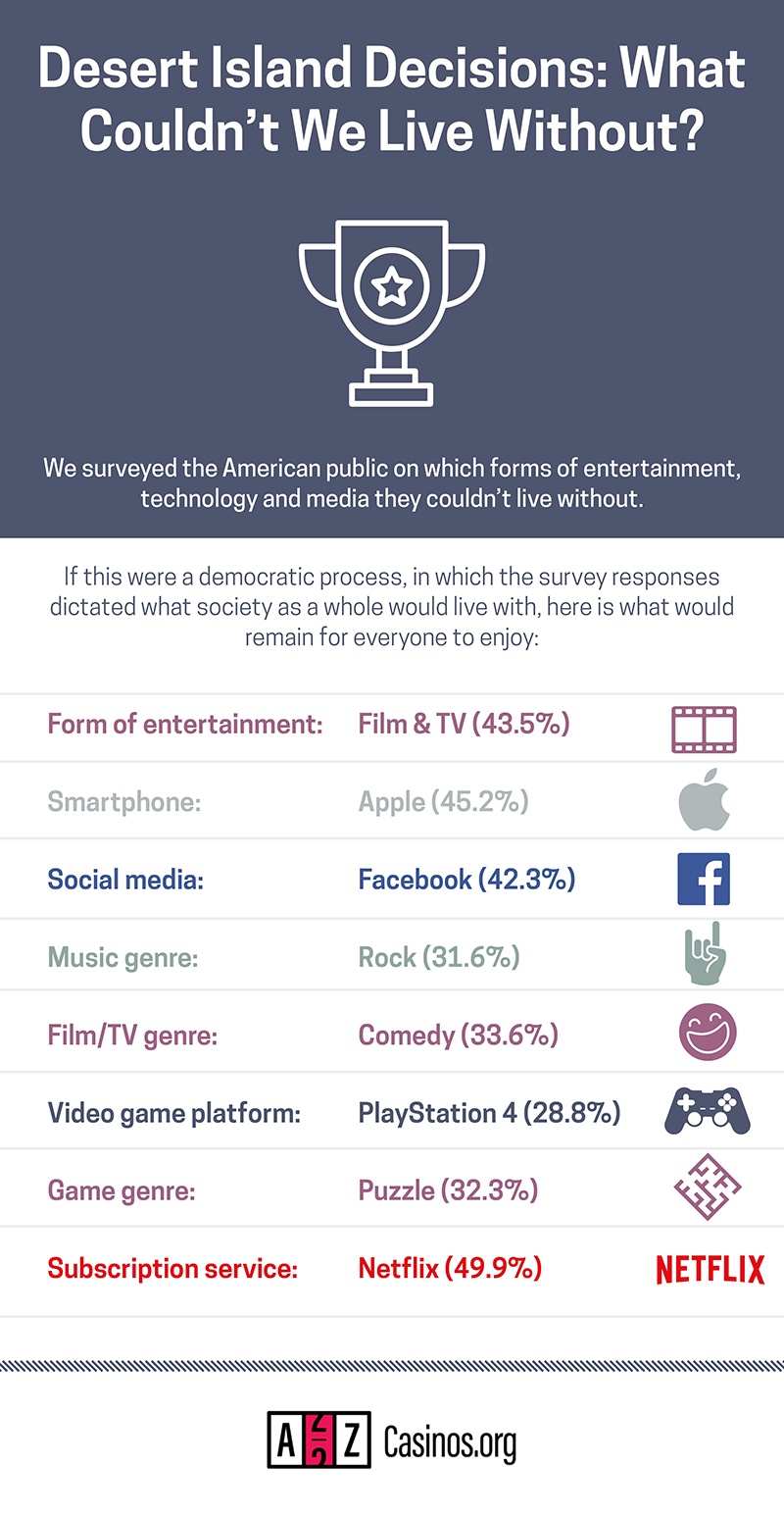 This may hint at a generational shift in terms of preferred smartphone, at least until Apple bring out their next big innovation to attract new fans and keep loyal customers. Like Apple, Netflix also found a relative weakness in the 18-24 market. 39.5% of participants in that age bracket opted for Amazon Prime, a strong win over Netflix’s 20.6%. Perhaps Amazon Prime’s delivery options proved more important for those in Generation Z.

As a whole, Netflix had the fewest issues of all the brands, storming to claim the biggest margin of victory. Facebook also won comfortably, securing over two times as many votes as its nearest competitor, Instagram. This means that these are happy days for Mark Zuckerberg, with Facebook also owning the photo and video sharing service.

Facebook was the most popular option in every age group, reflecting the ubiquity of the website. The days of asking ‘are you on Facebook?’ are long gone; now, it is just assumed that someone will have an account. Even though most social media users access multiple platforms, Facebook’s ability to act as both a platform for sharing content and a messenger service made it 42.3% of people’s choice.

Brand loyalty is clearly on show in the survey results, but genre loyalty is perhaps less clear-cut. It is difficult to go to one genre to satisfy all of your needs. While a third of respondents opted for comedy as their preferred movie or television genre, comedies may lose their charm if they were the only viewing option. Laughter may be one of the most important qualities of a TV show or movie, but so many great dramas would be lost forever if laughter was all that mattered. This is why we choose whatever suits our mood at any given moment.

The battle of music genres was even closer, with rock just fending off pop to come out on top. Most people only have one smartphone, while many only use one subscription service. However, few people exclusively listen to one genre of music. The broader nature of rock and pop was perhaps vital in outperforming more niche genres like rap and jazz. Rock music covers everything from Led Zeppelin to The 1975, so there's still enough diversity to keep things fresh.

The similarly broad nature of puzzle games may have contributed to this being the genre of choice for gamers. While action/adventure games have narratives that can be finished, puzzle games have a higher replay value because of the ease in which more puzzles can be generated. In our imaginary society these games would be played on a PlayStation 4, although the console only prevailed by a small margin over computer gaming.

With more options available than ever before, the dizzying array of choice that we face can sometimes be overwhelming. Choosing one brand or one genre would remove many distractions from our lives. However, the competition between companies is what keeps the industry leaders at the top of their games. Even though there is more choice than ever before, brand loyalty is still very much a part of business.