Casino Royale is a perfect example of how two different movies can tell the same story. The original, based on Ian Fleming’s novel, was released back in 1967. Meanwhile, the Martin Campbell-directed remake came to our screens almost 40 years later in 2006. As the name of the movie suggests, casino gaming plays a major role in both versions, which we’ll discuss in greater detail shortly.

First and foremost, it’s important to look at the context in which both Casino Royale movies were produced. The 1967 Casino Royale original was the first movie ever to be based (loosely or otherwise) on Ian Fleming’s James Bond novels. Producer Charles K. Feldman secured the film rights for the original back in 1960. Albert R. Broccoli and Harry Saltzman were also keen to work with Feldman on producing it under the umbrella of Eon Productions, probably before the release of You Only Live Twice.

However, the trio never came to a formal agreement on how the film would work in the Eon series. Subsequently, Feldman took the decision to forge ahead and create the film in a satirical light. 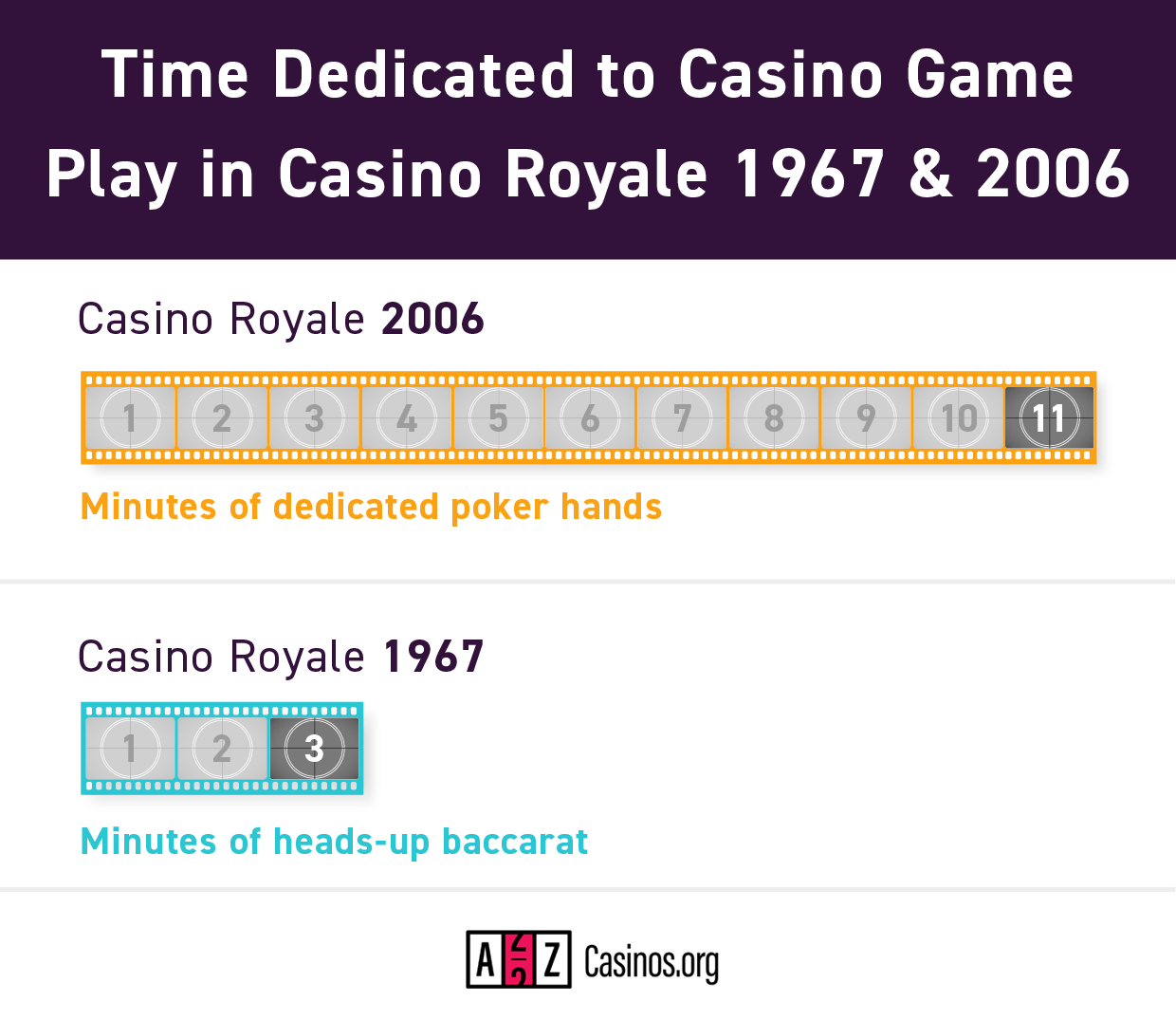 The likes of David Niven, Peter Sellers, and Woody Allen starred in an incredibly tongue-in-cheek take on Fleming’s original storyline. Although the movie was a huge success at the box office – raking in $41.7 million on an initial $12 million budget – it was roundly slated by film critics. Roger Ebert labelled it the “most indulgent film ever made”, while Time described it as “incoherent” and Variety deemed it to be a “conglomeration of frenzied situations”.

On the flip side, the 2006 remake of Casino Royale saw Eon Productions finally take hold of Fleming’s novel and provide a contemporary twist on the 1953 storyline as the third screen adaptation. It marked the debut of Daniel Craig starring as James Bond. The 21st century Eon Productions remake was a more hard-hitting affair, with the producers capable of taking a different perspective on Bond’s early career as a 007 agent. One which exposes his vulnerabilities and naivety at times.

Although budgets were considerably bigger in 2006 than 1967, the 2006 remake made a four-fold return at the box office, raking in over $606 million. It was cemented as the highest-grossing James Bond movie of all time, at least until Skyfall came along in 2012. One of the main reasons why the 2006 remake of Casino Royale was so successful was its immersive casino scenes. These moments of high intensity and drama demonstrate why casino gaming is still one of the most popular forms of entertainment, both online and offline.

The casino experience in the 1967 Casino Royale

The original Casino Royale is unlike any other James Bond movie and in that it makes a complete mockery of the secret agent theme. It would struggle to be any more tongue-in-cheek than it is, with the likes of Peter Sellers and Woody Allen. With Charles Feldman at the helm, it’s also fair to say that little would stay true to Ian Fleming’s original novel either. Feldman decided to rip up the rule book and introduce not one, but five or six different 007s – in a bid to confuse SMERSH who were keen to discredit Bond before his career had even begun.

Although many would describe the action in the 1967 version as somewhat chaotic, there were some rare scenes involving casino gaming in this spoof version. David Niven may have been the choice to play the “senior” James Bond, but it was Peter Sellers who would play the biggest Bond role at the casino tables here.

A look at the casino setup for the baccarat scene involving Bond (Sellers) and Le Chiffre, played by Orson Welles, reveals a classic land-based casino. There is a golden rail that runs around the casino table, allowing interested guests to watch and known as “railing”. This remains true in some of the most exclusive and prestigious VIP casinos. There’s no explanation as to why Bond needs to win Le Chiffre’s money at the baccarat table, but baccarat guru Evelyn Tremble is also asked to play Le Chiffre disguised as Bond.

Interestingly, the movie adopts the Chemin de Fer version of baccarat, which is one of the oldest documented versions of the game – a far cry from the Americanised Punto Banco version played online today. In Chemin de Fer, players can play head-to-head because one of the players acts as the bank and sets aside the wager to cover the bets of their opponent. Le Chiffre is duped into drawing an additional card and losing it all, after Bond (Tremble) entices him into one final hand in a “triple or quits” scenario.

The casino experience in the 2006 Casino Royale

The clearest difference between the 1967 and 2006 versions of Casino Royale is the type of casino game played by Bond and his enemies. In the Feldman’s spoof version, it was Chemin de Fer baccarat, and in the post-millennium remake, it was Texas Hold’em poker. The issue with poker and the big screen is that few movies manage to accurately replicate the game mechanics of poker and simply use it as a means of building tension and drama.

Even poker-inspired movies like Rounders, that have gone on to become cult favourites among poker players, have had their moments in failing to stay true to the action. There are three separate scenes where poker plays a major role in the Casino Royale plot. First and foremost, Bond visits The Country Club in the Bahamas to find one of Le Chiffre’s head honchos, a corrupt Greek official called Alex Dimitrios.

Bond takes Dimitrios on at The Country Club’s poker table in its exclusive casino. There were two main errors with this replication of a heads-up poker hand. First and foremost, Dimitrios ended up throwing the keys to his Aston Martin DB 5 into the pot, which any poker dealer worth their salt would have prohibited. Secondly, Dimitrios also splashes all his chips into the middle of the table which is poor poker etiquette.

We then get to see the poker style of Le Chiffre against two rich associates aboard his yacht. Le Chiffre moves all-in proclaiming to hold the best possible hand, and adding that his opponent has a less than 20% chance of landing a straight on the next card. It’s unclear whether Le Chiffre is bluffing here, but if he isn’t, it’s a very poor play as he would have been better off goading his opponent into playing and taking more of his chips.

The centrepiece casino scene in the 2006 version is, unsurprisingly, in the Casino Royale venue itself in Montenegro. Le Chiffre hosts a high-stakes Texas Hold’em tournament with a $10 million entry-free for players, with a view to playing and winning back millions of dollars of money owed to Ugandan terrorists. James Bond, played by Daniel Craig, was on a mission to win the tournament and stop the money from entering the hands of the underworld.

Given the high-stakes nature of the tournament, the casino decided to use rectangular gaming plaques instead of conventional poker chips. This is standard procedure for high-stakes cash games, but it’s less common for high-stakes tournaments where chips are more frequently used. Nevertheless, the plaques help to create the atmosphere of an exclusive tournament.

The tournament’s table was a conventional ten-seater offering, which most conventional poker rooms use today. The table was also situated on a raised platform, surrounded by railings to enable other patrons to watch the action unfold. This doesn’t quite capture the essence of a typical casino floor, but more like a lavish VIP side room, with very little chit-chat elsewhere in the space.

The tournament includes $5 million rebuys, which is a typical addition to most poker tournaments, allowing players to re-enter the competition if they are knocked out. The event is managed seamlessly by the dealer throughout, at least until Bond defeats Le Chiffre to scoop the entire $100m prize money. Before Bond ups and leaves the table, he slips the dealer a plaque worth $500,000. This is not strictly permitted in a poker tournament, given that the plaques are considered tournament chips rather than the monetary value of a cash game. 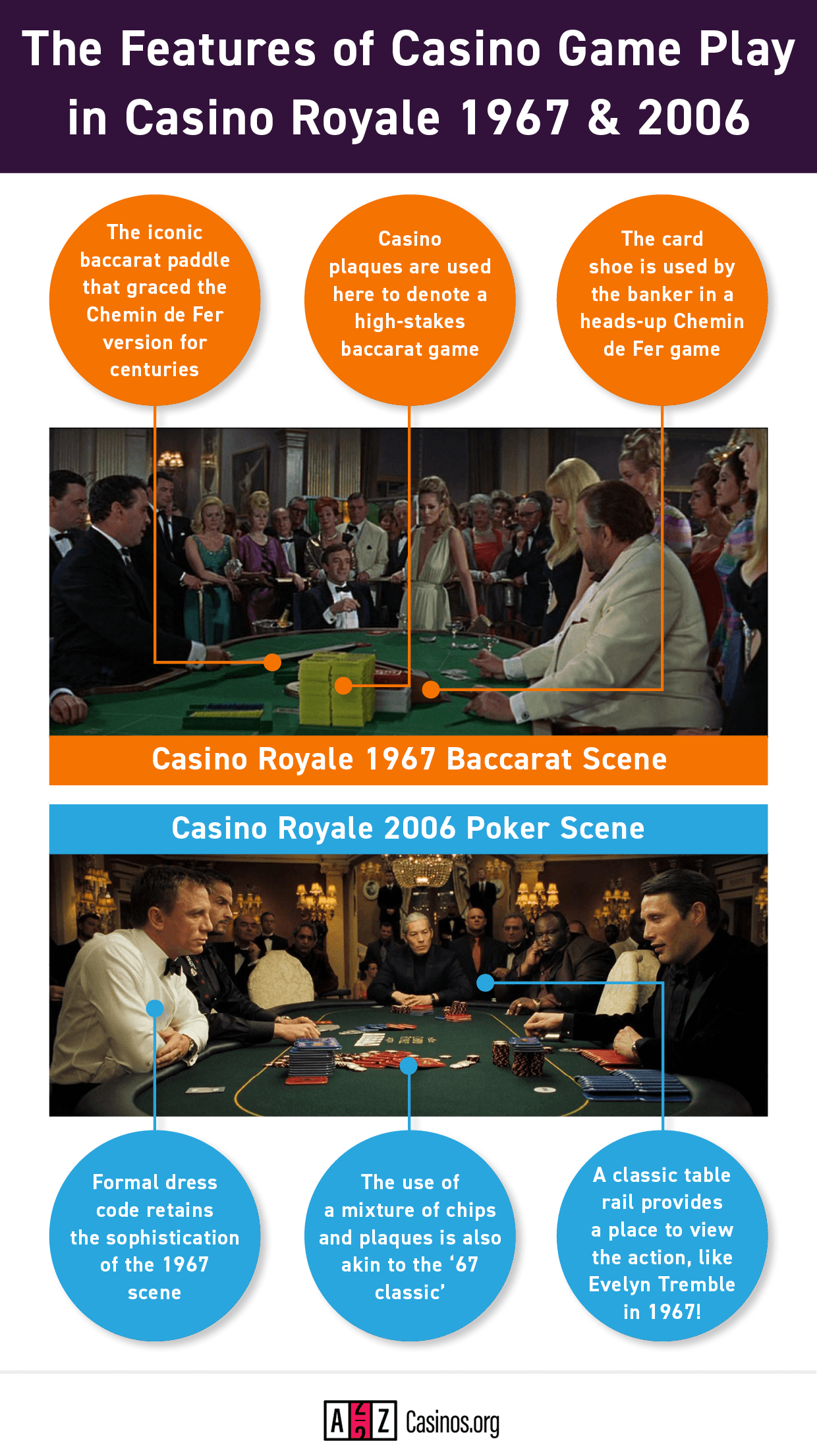 When it comes to comparing the casino experience in both versions of Casino Royale, it’s clear that the original stays true to the novel by incorporating baccarat. Granted, it’s about the only thing that remains faithful in this spoof, but this is largely due to the popularity of baccarat in the 20th century. It was considered a casino game for the aristocracy, a symbol of wealth and class.

The release of the 2006 Casino Royale movie arrived around the same time as the much-fabled Texas Hold’em “poker boom”. It was a period of huge growth for the online poker industry, while the biggest land-based poker tournaments also benefitted hugely from the boom.

Texas Hold’em poker had overtaken several other classic casino games like blackjack, roulette, and baccarat as the number-one game of choice for many. It was therefore the easiest casino game that viewers could relate to, with the producers remaining true to the Le Chiffre storyline. 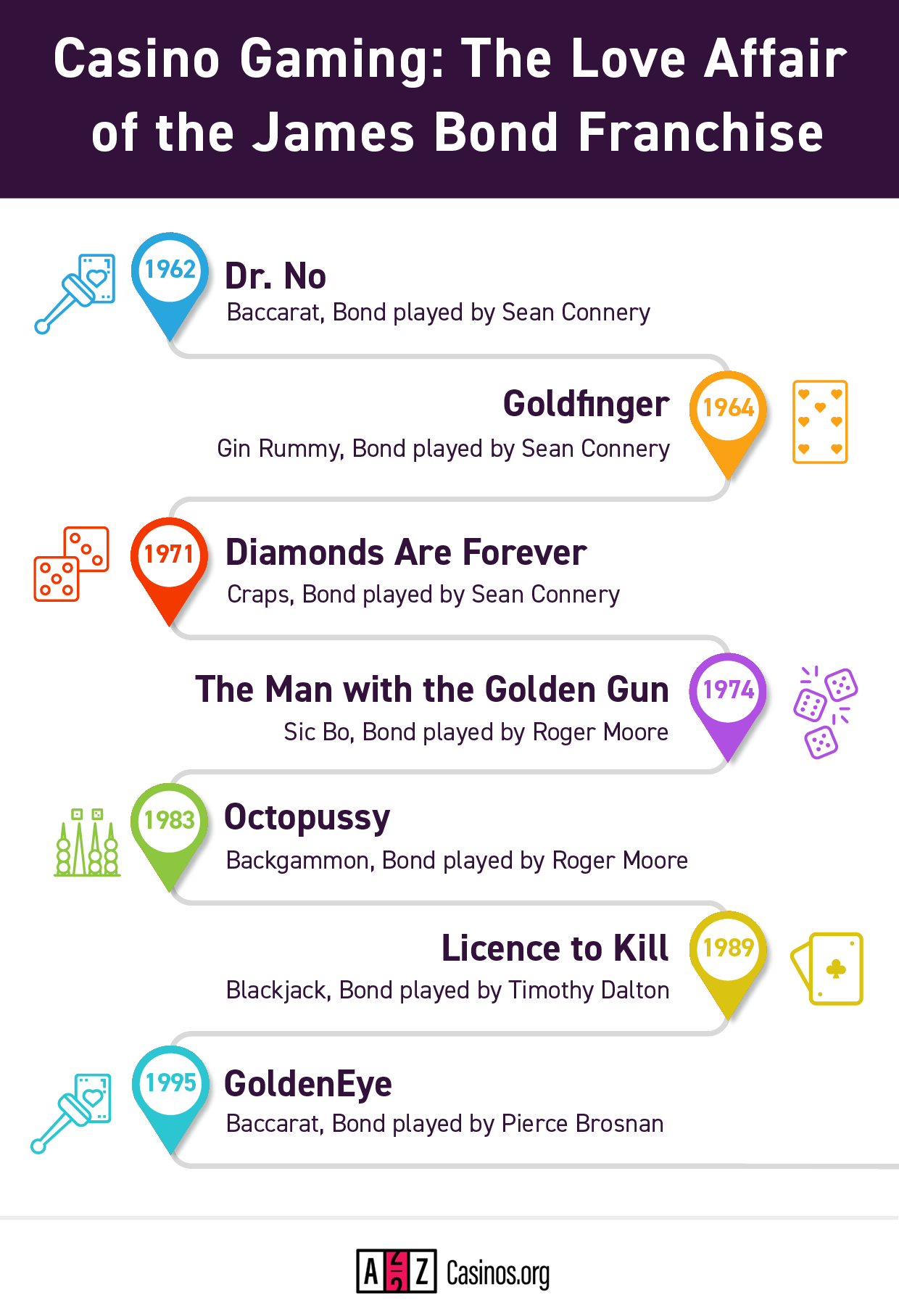 It’s fair to say that the 1967 Casino Royale version captured the old-school essence of a casino floor experience, harking back to the traditions of card shoes and paddles at the tables. The 2006 reboot is an accurate representation of a more contemporary casino setting.

This setting is also replicated across today’s leading live dealer studios, where classy studio rooms in the style of Montenegro’s Casino Royale provide the backdrop for professionally trained dealers to run classic table games in real-time.