Features Lucky Escapes: The People Famous For Their Lucky Lives And Great Gambles

Lucky Escapes: The People Famous for Their Lucky Lives and Great Gambles

Phil Collins asked everyone to take a look at him in 1983 because, against all odds, he was going to win over the love of his life. Whether he succeeded or not is irrelevant. We hope he did, but what made his lyrical masterpiece so engaging, other than his voice, was the fact he was willing to play the odds. Regardless of whether or not he was guaranteed to win, he rolled the dice, took his shot, and went for broke.

As observers, we love that. We love people that take a chance and beat the odds. Of course, Phil Collins isn’t the only person to pique our interests in this way. Flick through the history books and there are plenty of names that stand out. For example, Joan of Arc, a 14-year-old peasant, was able to influence the course of history by persuading the Dauphin of France to battle his English counterpart.

In terms of defying the odds and being in the right place at the right time, she’s a great example of what can happen when fate and timing line up. But, like Collins, Joan of Arc isn’t alone. In fact, we’ve found three characters that were not only in the right place when fate struck, but prospered in spite of the odds. 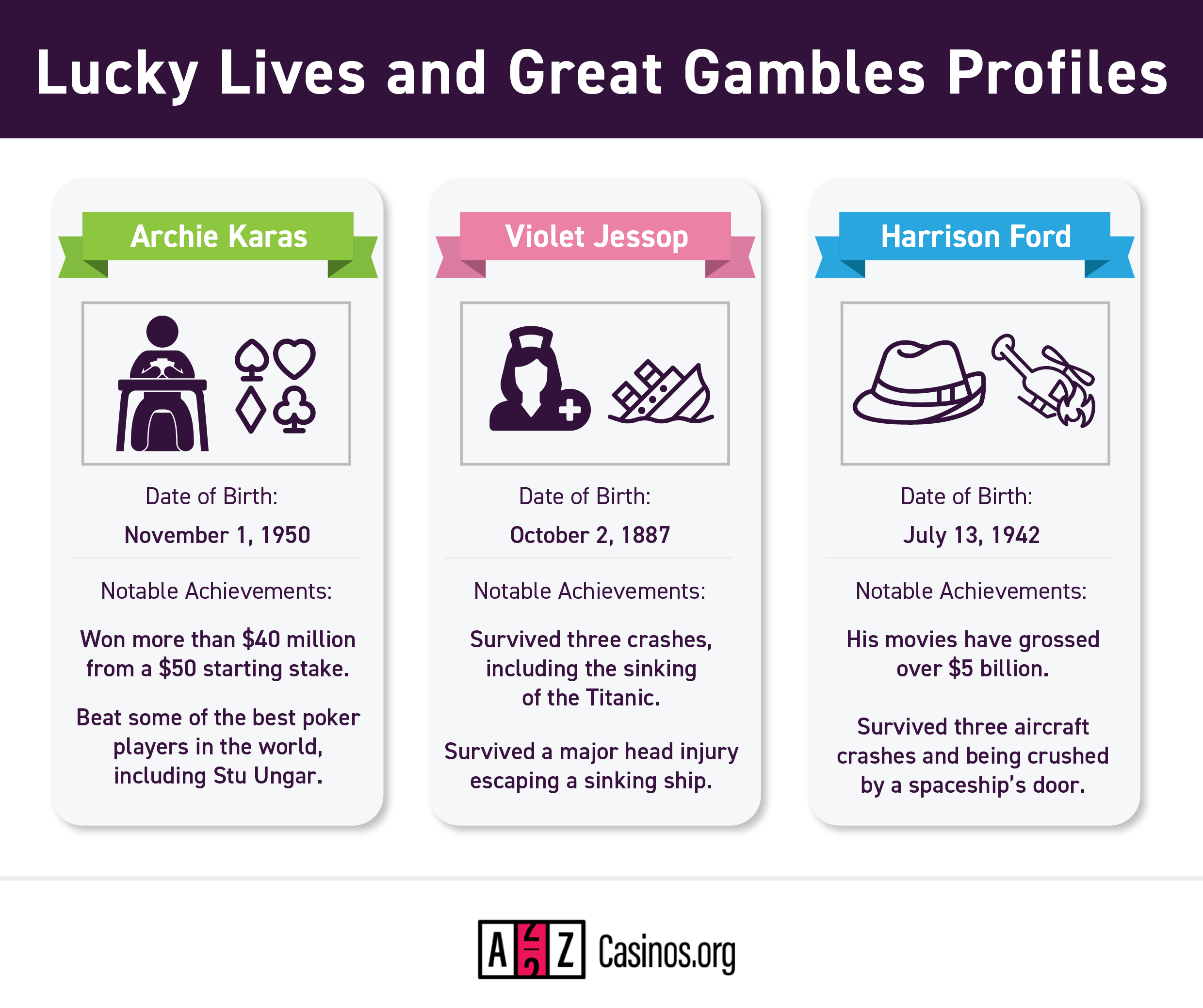 Archie Karas – The Gambler Who Took on Las Vegas and Won

Anargyros Nicholas Karabourniotis, better known as Archie Karas, is an example of what can happen when the gaming gods smile on you. Even though his story doesn’t have a positive ending, Karas will go down in gambling folklore for his $40 million run that almost broke the bank in Las Vegas. It all started with $50 and a trip to Sin City. However, before that, a young Kara had to make the trip from Greece to the US. He didn’t come from a wealthy family, but he found a way to emigrate from Kefalonia in search of the American Dream.

When he arrived in the early nineties, Karas found work in an LA bowling alley. It was there he learned to be a pool hustler. That was his introduction to gambling. From this early introduction to betting, he spent time playing cards (mainly poker) in LA and, according to reports, won a million before he ever went to Vegas.

However, for whatever reason, he had little more than $50 in his pocket when he made his now-infamous trip in 1992. After arriving at the Mirage, Karas asked an old poker friend from LA to loan him $10,000. Surprisingly, the man said yes. That was win number one. From there, he turned $10,000 into $30,000 playing a variant of poker known as Razz. The loan was quickly returned and, with that, “the run” had started.

By another twist of fate, Karas bumped into a wealthy pool player. The two played a series of high stakes match and Karas won $1.2 million. They eventually switched to poker and, again, Karas came out ahead. This time, he won another $3 million. At this point, most people would stop, but not Karas. His disregard for money meant he had no fear which, in gambling, can be a powerful weapon when used correctly.

Karas certainly used this to his advantage and, with a little help from lady luck, he turned $4 million into $40 million playing blackjack, roulette, slots, poker, and anything else he could bet on. However, it wasn’t all down to luck. Even though he was rolling the dice, Karas was an accomplished poker player. Indeed, during his run, he was able to beat the like of Chip Reese, Puggy Pearson, Johnny Chan, and Stu Ungar. That was no mean feat, and, for all his good fortune, there was definitely skill involved.

Eventually, however, the tables turned. His three-year run was about to end. Luck went against Karas and, almost as quickly as he’d won $40 million, he lost it. However, for everything that happened after, Karas will always be remembered for what’s arguably the greatest run in the history of gambling.

Violet Jessop could be called the luckiest women to ever live. However, she could also be called the angel of death. Her story is one of victory and tragedy. Jessop was born in Argentina in 1887 and her lucky streak was apparent existent from the very start. She was the first of nine children and, of those that were born, just six survived. By that token, Jessop was already more fortunate than 33% of her siblings.

Throughout her childhood, she survived tuberculosis which, at the time, killed one in four people! At 16, Jessop lost her father and looked after the family while her mother was working at sea as a stewardess. By age 21, Jessop followed her mother and became a stewardess on board the Orinoco. All was well during her time on the Royal Mail Line vessel and she soon earned herself a job on RMS Olympic in 1911.

It was the largest civilian liner at the time and, in many ways, the Titanic of its day. That, perhaps, was an ominous sign. During a routine voyage, RMS Olympic collided with British warship HMS Hawke. No one was injured but the incident set the tone for what was to come. Indeed, just a year later in 1912, Jessop found herself on the Titanic. Four days after leaving Southampton, the luxury liner hit an iceberg en route to New York.

The ship’s lining was breached and, as we know from countless recollections of the event, it sank into the icy water. More than 1,500 people died, but not Jessop. She was one of the lucky ones. Again, she was in the right place at the right time. As 2,240 passengers fought to survive, she was ushered onto a lifeboat. Jessop was handed a baby to look after and, the next morning, she was rescued by RMS Carpathia.

Based on those that survived and those that died, Jessop was in the 30% range (37% to be precise), which strangely links to her childhood. However, this wasn’t to be her final brush with death. While onboard HMHS Britannic in 1916 (yes, she returned to the water!), she was forced to flee another sinking ship. Although only 30 of the 1,066 passengers died this time, Jessop had to jump from a lifeboat to avoid being killed by the ship’s propellers.

She survived the jump but sustained a serious head injury. But, again, she came through to live out the rest of her life as a stewardess on other ships. As news of her miraculous luck got around, she became known as Miss Unsinkable until the day she died of heart failure in 1973 aged 83.

The final tale of fortune and being in the right place at the right time is Harrison Ford. Long before he was one of the biggest stars in Hollywood, Ford was a regular Joe working as a carpenter. Even though he’d dabbled in acting before worked with wood, Ford was by no means a world-class performer. However, when luck, determination, and talent are combined, anything can happen; and happen it did.

Ford first appeared on screen in 1967 in A Killing for Time. He got another small part in 1973 when George Lucas cast him in American Graffiti. However, as is often the case with acting, that wasn’t enough to sustain any sort of lifestyle. With little money and no other roles, Ford turned to carpentry. It was during this time he started working with Francis Ford Coppola. As well as giving Ford a small part in The Conversation, Coppola had the budding actor do carpentry work on the side.

From this, a star was born and the rest, as they say, is history. Ford had wedged his way into Hollywood’s inner circle and soon he was getting high-profile roles in movies like Star Wars. The Indiana Jones franchise followed and, ever since, he’s been regarded as one of the leading actors in the world. However, that’s not the only reason Ford is known as lucky. Yes, breaking into the movie business is tough. However, there’s a little something extra to this actor.

For example, Ford was injured on the set of Star Wars: The Force Awakens in 2014. During a scene sequence involving the Millennium Falcon, a piece of equipment malfunctioned and a door hit Ford. Given the weight of the object, he was lucky to survive, not least because he was 71-years-old at the time. However, given what we know about Ford, it’s no surprise he came out the other end. Much like Jessop, the Hollywood A-lister refuses to go down. This time, however, we’re talking about planes, not ships.

As a keen pilot, Ford is used to flying helicopters and light aircrafts. However, for all his training, luck hasn’t been always been on his side. Over the years, he’s been involved in three crashes. The first occurred in 1999. Ford was on a helicopter training flight in Santa Clarita, California, when it rolled over during a landing. No one was injured but it was the start of a potentially deadly pattern.

Indeed, just a year later, Ford was forced to carry out an emergency manoeuvre when a gust of wind caught his helicopter on the runway. Then, in 2015, Ford had one of his worst accidents after a crash landing. According to the incident report, the engine of the plane stopped working. Ford was able to get back to the runway (3 miles away) and tried to land on a golf course.

Unfortunately, he hit some trees and crashed. Ford was taken to hospital with serious injuries but that didn’t stop him from flying. In 2017, he avoided another potentially fatal incident after landing on the wrong runway. Fortunately, he was able to avoid other planes and get home safely. However, had it not been for his apparent lucky streak, he may not have made it. 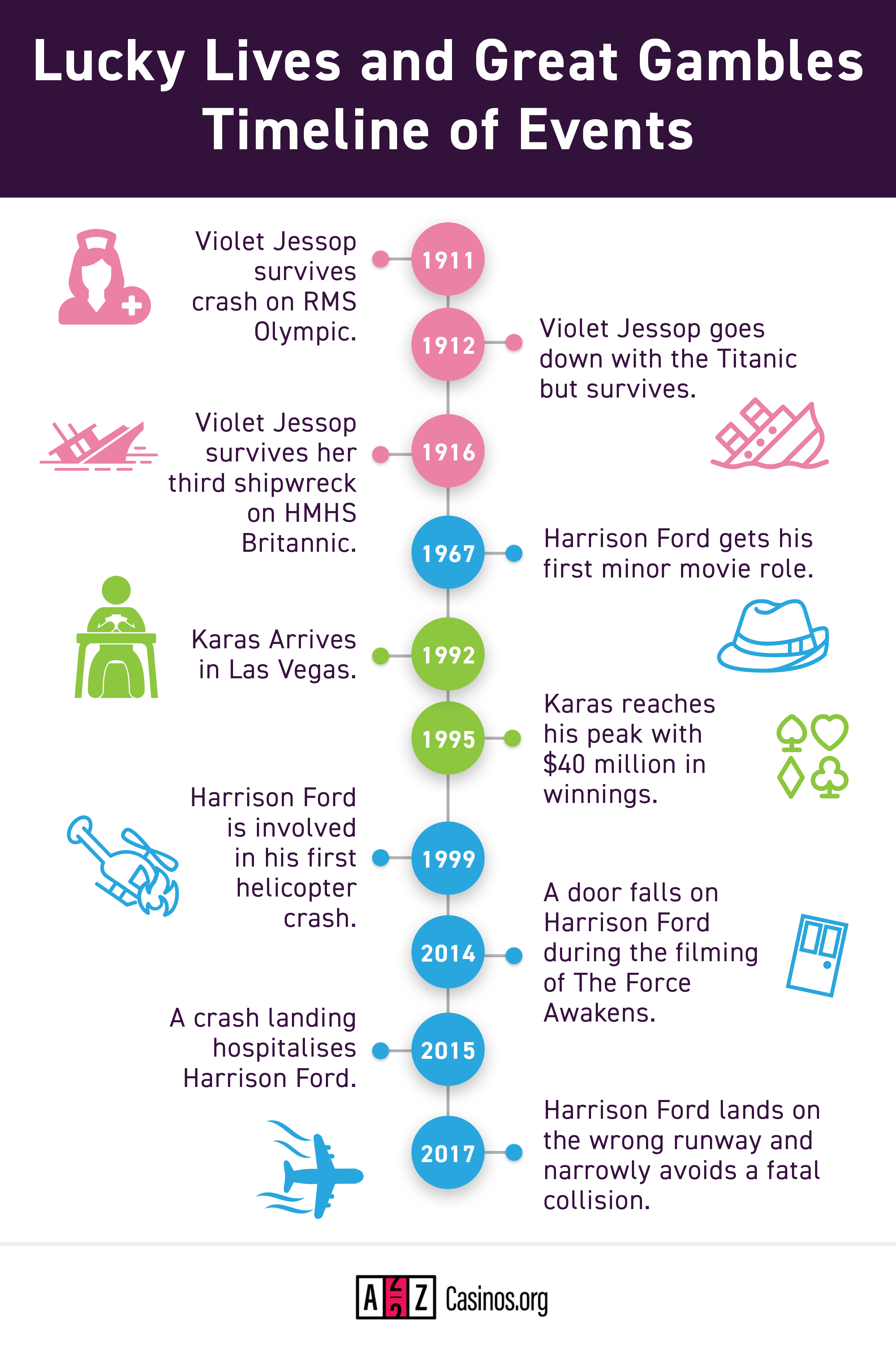 The Odds Are Odds for a Reason

Unless something is 100% guaranteed, there’s always a chance things can go one way or the other. The three people outlined in this article prove that. Even though everything was stacked against them multiple times, they always came through it.

That’s a lesson for life. Just because the odds aren’t in your favour, that doesn’t mean you shouldn’t try. Indeed, if you can learn to take the rough with the smooth and play the game, come what may, you too could find yourself in the right place at the right time like Karas, Jessop, and Ford. 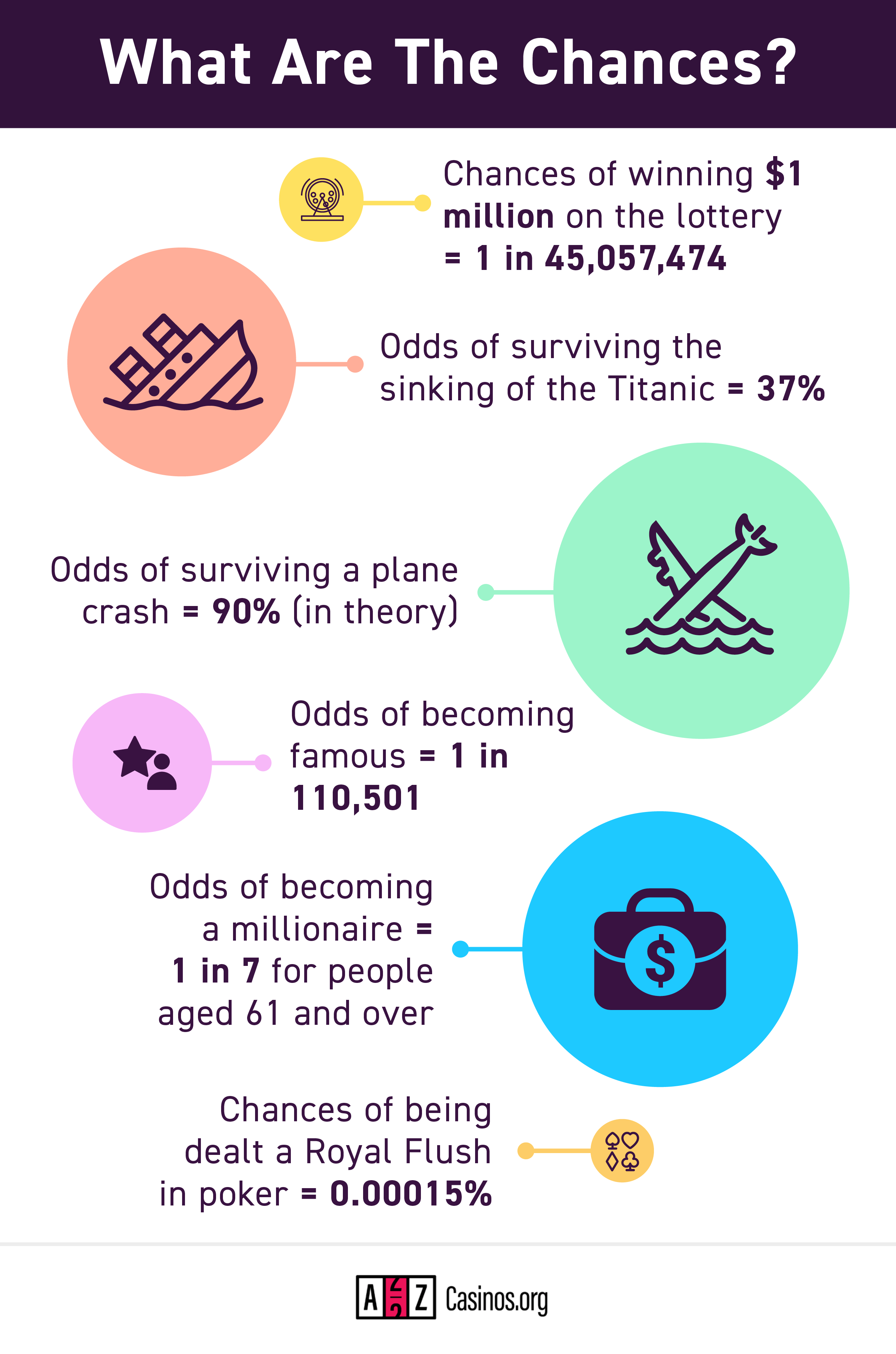