Features New Year, New You - But How Many People Actually Keep Their New Year’s Resolutions?

New Year, New You - But How Many People Actually Keep Their New Year’s Resolutions?

It is easy to see why a New Year feels like the right time for a fresh start. After all, when you open up a new calendar on January 1st, you have a completely clean slate to work with.

Any difficulties faced in the previous 12 months can be put to one side, while you may even decide to give up on some bad habits that you might have developed recently too. The future is suddenly full of excitement and endless possibility.

Of course, some people like to set targets and goals for the year ahead when January rolls around, with the most common being the New Year’s resolution.

When Did We Start Making New Year’s Resolutions?

According to experts at History.com, the concept can be traced all the way back to the ancient Babylonians around 4,000 years ago. Their new year apparently began around March when crops were planted, and they would make promises to gods during the same period. If they managed to keep them, it was thought their deities would look down on them favourably in the year ahead.

But, while New Year’s resolutions have seemingly had a place in our culture for thousands of years, that also means humans have probably been struggling to keep to them for the same amount of time. Starting a New Year off with the best of intentions is a great idea, but sometimes it can be tough to keep to the commitments you have made. Many things might get in the way, from issues with your work-life balance to unforeseen circumstances, and much more.

So, with that in mind, what are the odds of us keeping to our New Year’s resolutions, and when do we start to struggle with them the most? Here, we will try to answer some of the big questions around this famous tradition.

How Many of Us Make New Year’s Resolutions?

First things first – while the concept of New Year’s resolutions is known across the world, it is interesting to note just how popular the notion is with people here in Canada. According to a YouGov survey conducted in December 2019, 29% of people living in the country intended to make a resolution for 2020.

The study also explored the different issues that Canadians were looking to address with such commitments, with just over half stating that they wanted to exercise more. In addition, 49% said they wanted to save money, while 48% were hoping to embrace healthier eating habits. Losing weight was also an important issue for 42% of people, while just over a third aimed to reduce their stress levels. Budgeting, getting more sleep, and developing stronger bonds with friends and family were also referenced as key issues. 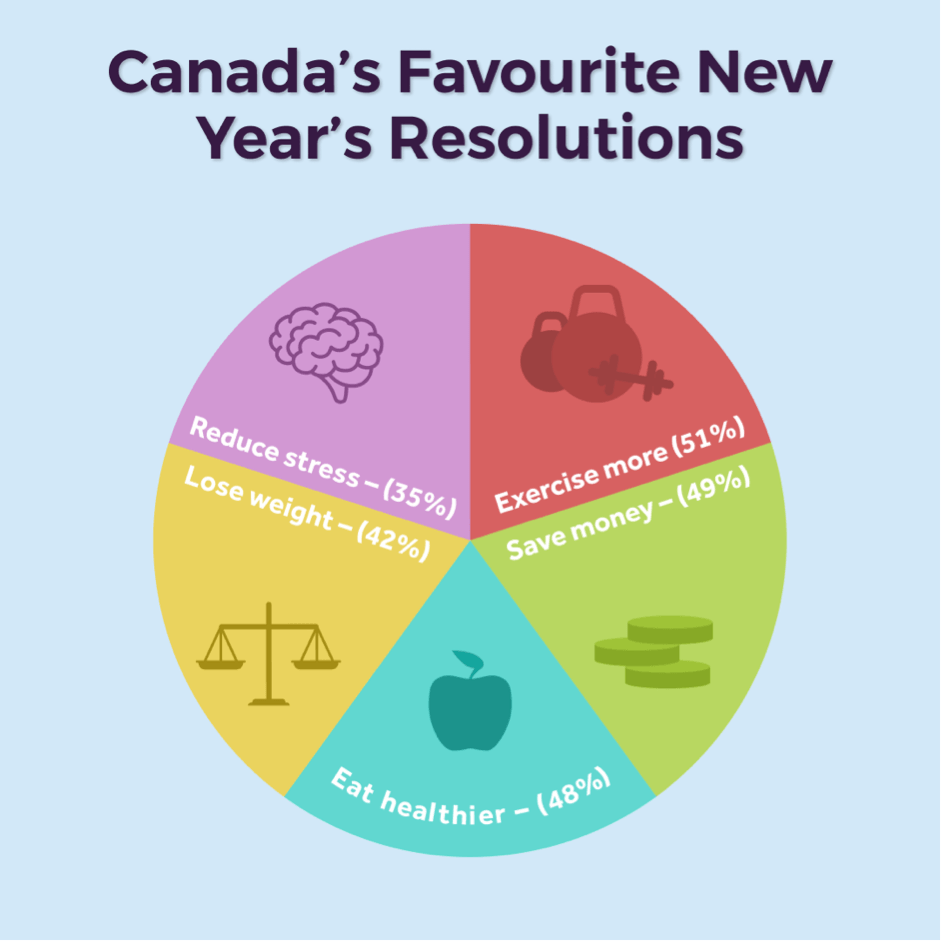 The research went on to reveal that us Canadians are a confident bunch when it comes to New Year’s resolutions, with 72% of respondents saying they were either somewhat or very confident about keeping to their commitment. However, while that might sound very positive, other research has suggested that the reality of sticking to New Year’s resolutions is rather different.

How Many People Struggle with New Year’s Resolutions?

Back in 2010, Ipsos Reid carried out research on behalf of Sun Financial that looked at the issue of New Year’s resolutions. It went on to uncover some fascinating findings about just how successful Canadians tend to be when making them. 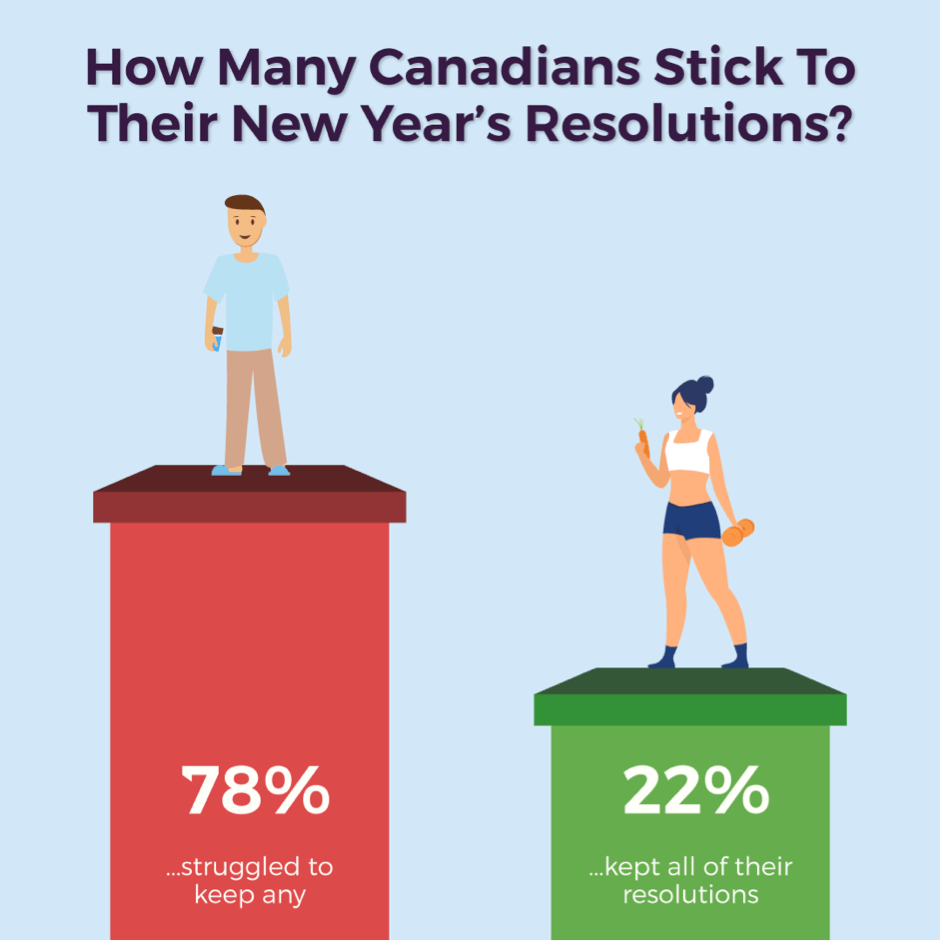 It found that a massive 78% of people in Canada failed to stick to all of their past resolutions, which means that just over a fifth managed to see each of their commitments through to the end. Interestingly, the study highlighted that Canadians back then had similar goals to those identified in the more recent 2020 study, with key resolutions including to exercise more, lose weight, and eat better. In addition, respondents cited a wide range of reasons when discussing why they struggled to keep their New Year’s resolutions alive. 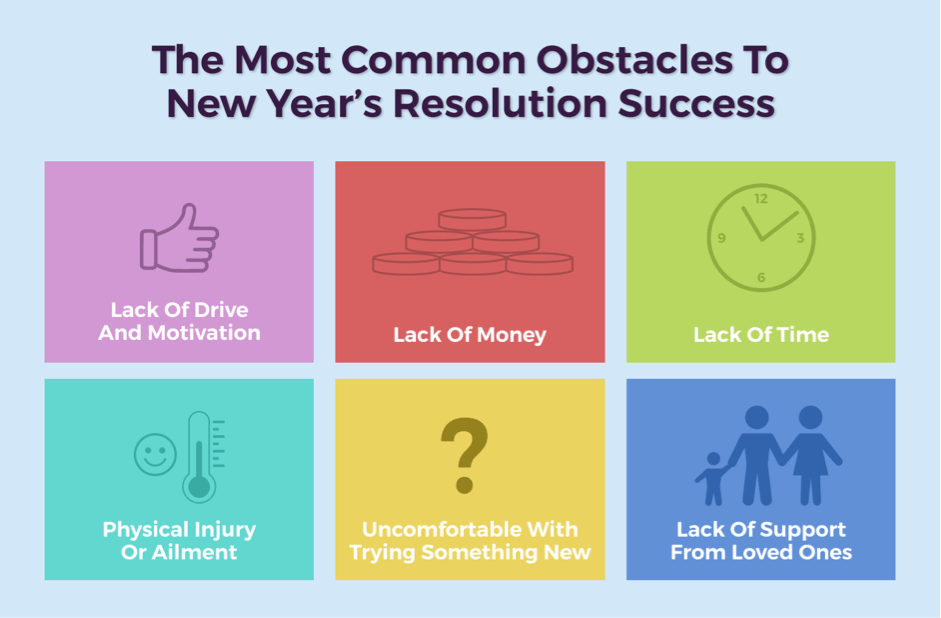 The biggest issue raised was a lack of willpower or drive, with a large majority of respondents making reference to this. More than a third also mentioned a lack of money, while 35% added that a lack of time was a factor. Physical ailments also had an impact on some people’s resolutions, while others mentioned a lack of necessary equipment or exercise facilities. Around a tenth of people referenced a lack of support from family and friends, while some even said they had similar issues with employers.

How Long Do We Stick to Our New Year’s Resolutions?

All things considered, it seems clear that a great number of people struggle with their New Year’s resolutions. However, it is worth bearing in mind that studies seem to suggest many do not give up easily. Rather than throwing the towel in just days into January, it appears that many people stay committed to their resolutions for some time – but become unstuck further down the line.

The exact timeframe can of course vary, although it could be suggested that the period from March to May is often a critical moment for such promises. Last February, a study by Quicken Group CEO, Mor Weizerfound that 86% of people in the US will have given up on a New Year’s resolution by the end of the first quarter – or March 31st. The study also revealed that common reasons for giving up on resolutions included being too busy, trying to do too much at once and losing interest. 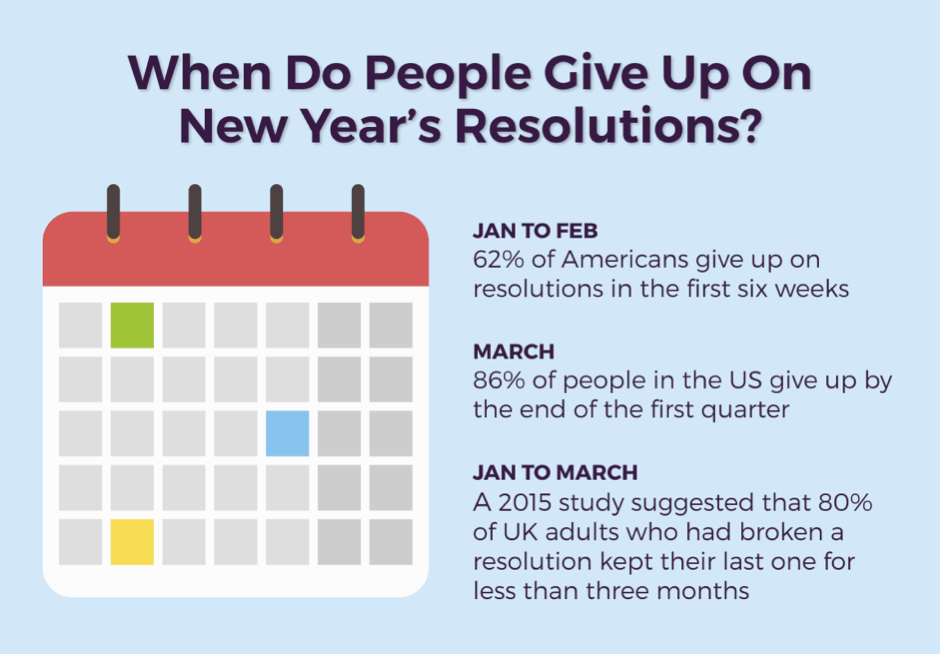 Back in 2015, The Guardian also reported on research by Comres and Bupa that hinted at a similar timescale for adults in the UK. It found that 63% failed to stick to a New Year’s resolution, with 80% of those people managing to keep their last broken one going for less than three months. Interestingly, 66% managed to last just a month or less, while 43% did not actually reach a month.

Earlier, we touched upon how health and fitness tend to be big issues when it comes to New Year’s resolutions. So, it may also be worth looking at gym-related research for some indication as to how long resolutions last. Noob Gains dedicated an entire infographic to the issue last year and quoted figures from CouponCabin on it. The research apparently found that the majority of gym members who join in January quit within five months. But why does it take people this amount of time to ultimately give up on a resolution? The aforementioned Ipsos Reid study from 2010 mentioned willpower was a major obstacle for Canadians, so perhaps the period from March to May is simply when the drive and determination to persevere with a resolution really starts to wane.

Should We Even Bother with New Year’s Resolutions?

So, if a number of people struggle with New Year’s resolutions and many seemingly give up on them a few months into the year, is there any actual point to making one? The studies and data mentioned above may make such commitments seem like a thankless task, but some experts have hinted that there is some benefit to them.

In an article for Science Focus published at the start of this year, BBC presenter and health writer Dr Michael Mosley considered the issue of whether resolutions are actually worthwhile. He mentioned research undertaken in 2002, which analyzed people who made New Year’s resolutions in relation to specific goals. Their progress was then compared to others with similar goals who had not made a resolution. The study checked in with the participants six months later and found that almost half of those who made a resolution felt they had been successful. In contrast, only 4% of those who did not make a resolution said the same.

So, if there are potential benefits to be had, what is ultimately the best way to set a target? The YouGov study released last year seemed to suggest that Canadians set quite vague goals, such as ‘exercise more’, ‘save money’ or ‘eat healthier’. However, in his piece for Science Focus, Dr Mosley suggested that setting fairly general targets like that is not the best approach to take. His first key piece of advice when it comes to committing to New Year’s resolutions was to ensure they are specific. So, rather than simply stating that you want to get fitter, he suggests that you figure out clear goals or activities that you plan to do. Another piece of advice also addressed one of the key obstacles identified in the Ipsos Reid study, as he suggested that getting friends and family involved and having their support could also be crucial.

Creating New Year’s Resolutions That Are Built to Last

New Year’s resolutions have seemingly been part of our culture and traditions for centuries and many of us remain committed to using them as we push forward with our lives. However, creating a real sense of change in different areas of life is not always easy, as finding the strength, willpower, and determination to target new goals and stick to them can be tough.

The studies and articles mentioned above show how New Year’s resolutions are clearly a source of fascination and it is interesting to consider such issues. By examining the insights, we perhaps have the chance to get some pointers on how to come up with a resolution that is ultimately built to last. After all, if we know about the key issues that people face and the times when they struggle, we may all be better prepared for the moment when we resolve to be a better version of ourselves next January.