Features The Biggest Election Bets That Didn’t Quite Pay Off

The Biggest Election Bets That Didn’t Quite Pay Off

Straw polls have been used to try and anticipate the outcome of hotly anticipated political elections and referenda for centuries now. In fact, the first form of political polling dates back to the 1824 US Presidential Election. The Harrisburg Pennsylvanian newspaper curried favour with local voters to try and steal a march on other reports and newspapers.

Wind the clock forward to the present day and it is clear that election opinion polls are very much under the microscope. Although it’s important to keep in mind that political polling is only designed to provide a snapshot of voting intentions across a range of demographics and communities, the fact of the matter is that lots of people lean heavily on the pollsters to come up trumps – not least those who like to indulge in a spot of election betting.

Nevertheless, the legitimacy and reliability of these opinion pollsters is becoming increasingly thin. A spate of exit polls after the UK’s Brexit referendum, the UK’s 2015 general election and the 2016 US presidential election all failed to predict the final outcome, which has led many to question whether they can rely on opinion polls to demonstrate value in the election betting markets.

Although the inaccuracy of exit polls at the most recent elections has raised more questions about the process than ever before, it’s fair to say that opinion polling has been wrong on many occasions in the last century. In 1948, the US presidential election was a two-horse race between Republican Thomas E. Dewey and Democrat Harry Truman. The former was heavily tipped to win the election based on the polls and the beliefs of the press.

Pollster Elmo Roper was so certain that Dewey would defeat Truman’s challenge that he confirmed eight weeks prior to election day that he knew that likely outcome and would not be taking further polling surveys. Bizarrely, fellow pollsters Archibald Crossley and George Gallup continued to take opinion polls in the lead up to the 1948 election and still missed a pivotal swing in support from Dewey to Truman in the final days of the election campaigning. Virtually every opinion poll still predicted that Thomas E. Dewey would become the next US president, but Truman would go on to win 303 electoral votes and 49.6% of the popular vote, while Dewey claimed just 189, which equated to 45.1%.

What is the key to a political poll?

First and foremost, it’s important to understand the context of every opinion poll published. Some polls will be paid-for by campaign groups, supporting one particular party or individual. In which case, there is the potential for these polls to contain loaded questions or for organisations to take selective results from the data to fit their narrative. Ideally, the political opinion polls to look out for are those carried out by independent third-parties.

Furthermore, you should also pay attention to sample sizes to determine the significance of a poll when deciding which way to bet in the election betting markets. A survey should have a minimum of 1,000 people to be of any use. Most pollsters will either take a random approach to the individuals they quiz, based on names from the Electoral Roll, or a quota-based approach based on asking an even spread of age and gender demographics.

In more recent years, there has been increased scrutiny on political polling, due largely to the proliferation of election betting markets offered by high-street and online bookmakers. Election betting has been made possible on desktop and mobile devices, allowing punters to take a stance on the outright result of an election or referendum or even the single result of a local by-election.

Data science, while proving to be generally reliable, can still get things very wrong. This means that for some bettors, what can appear to be a sure bet can actually lead to some costly surprises on the night. And equally, what may initially be a playful gamble in the first instance can become a lucrative payday.

With that in mind, let’s take a look at some of the most recent elections and referenda where the pollsters have mystifyingly misread the mood of a nation.

2015 saw one of the most fascinating general elections in recent memory, as Conservative Party leader David Cameron sought to defeat Labour Party leader Ed Miliband and reassert the Tories with a parliamentary majority in the House of Commons after five years of a Tory-Lib Dem coalition. Prior to the 2015 general election, the pre-election betting odds suggested that the most likely outcome would be a Conservative minority government, with this scenario priced as short as 5/2 with most bookies, given that Cameron could command support from either the Lib Dems or the DUP to govern.

The prospect of Cameron winning outright was as long a shot as 10/1 with the leading bookmakers, which was almost the same price as the likelihood of a Labour minority government. The pre-election day pollsters and even many polls taken on the day of the election were proven wrong. Almost a fifth (18%) of the campaign polls predicted the election would result in a dead heat, while almost half (46%) alluded to the potential for a Labour lead.

The key to this election outcome might just have been in the polling on voting intentions. In a TNS poll, some 89% of Conservative voters said they would be going to their polling station to vote, compared with just 80% of Labour supporters planning to vote. It was these figures which saw the likes of the BBC use the tag “Lazy Labour”.

In terms of seismic political shocks, the UK’s EU referendum in 2016 is up there with the biggest in the modern-day era. On June 23 2016, the UK voted in a nationwide referendum to decide whether to remain a part of the European Union (EU). In the week leading up to the vote, just three of the 13 main opinion polls undertaken gave the ‘Leave’ vote a lead. In fact, as the nation moved ever closer to June 23, the surveys appeared to be more definitive towards a ‘Remain’ victory. A survey of 4,700 people from Populus gave Remain a ten-point lead, while a YouGov poll of 4,772 people lead to a 52% Vs 48% lead for Remain.

A female punter was so sure of Remain winning the referendum that she placed a £100,000 wager at her local bookies in London at odds of only 2/5. The fact she was prepared to risk £100,000 to win just £40,000 underlined the growing confidence among Remain voters. Betting on the 2016 EU referendum resulted in unprecedented levels of turnover for bookmakers, with some describing it as akin to a FIFA World Cup summer.

As we all know, the official outcome of the referendum was almost turned on its head from YouGov’s final opinion poll, with Leave eventually winning with 51.9% of the vote. John Curtice, Senior Research Fellow at NatCen Social Research and Professor of Politics at the University of Strathclyde, was regularly quizzed on national television to explain how the opinion pollsters could be so wrong twice in two years.

Curtice pointed to the difference in voting intentions from those polled by telephone and by internet, with a five-point swing to Remainers on phone polls and a 50/50 split in online polls. Curtice said that “this divergence alone” was enough proof that predicting referendum voting intentions would be extremely difficult. The fact that Remain was still the odds-on favourite in the election betting on the evening of the vote demonstrated what a knife-edge the result was on.

2016 was the year for two political surprises – Brexit and the populist rise of President-Elect Donald Trump in the US. An entrepreneur first and foremost, Trump was viewed by many Americans as the safest pair of hands for the national economy. Having started the US presidential election betting as high as 150/1, Trump’s “Make America Great Again” slogan garnered support among Republicans and he soon became the overwhelming favourite to head-up the party and challenge Democrat Hilary Clinton, who was bidding to become the first female president of the US.

In a similar fashion to the opinion polling of the UK’s Brexit referendum, just three out of the last 39 polls conducted prior to the election had Donald Trump leading. Interestingly, three of the polls favouring Trump were conducted by the USC and the Los Angeles Times, giving him a five-to-six-point advantage. Even at the start of the election month of November 2016, punters could bet on Trump at around 9/2 to replace Barack Obama as the next US president, with Hilary Clinton a short-priced 1/6 favourite.

Few believed that a man with no political background could come in and win. Major US news outlets such as CNN suggested in the hours after the result that political pollsters had underestimated the size of the voting turnout across rural areas in all states, attracting widespread support from white collar professionals in suburban areas too. At around 4am on the morning of the day after the election, Trump was given a 91% chance of victory and the Betfair Exchange’s ‘Next President’ market had turned over an outrageous £173.86m.

The 2020 US Presidential Election Restored a Sense of Order

This year’s US presidential election may just have restored our faith in nationwide opinion polling, however. President Trump opted to run for a second term in office against Democrat and former Vice President Joe Biden. Three months into the COVID-19 pandemic and Biden became the odds-on favourite with the bookmakers in the 2020 presidential election betting market, with Trump given a 47.62% implied chance (11/10) of winning.

From June 1 onwards, it was one-way traffic in the betting market, as Biden’s price fell from evens to 6/10. From September 29 until election day, only two opinion polls had Trump ahead of Biden. In the final days leading up to the election, the likes of YouGov and Ipsos and Reuters had Biden up by 10% and 7% respectively. The official outcome has so far seen Biden claim 51% of the overall vote – up by 3.7% on Trump to the tune of 5.6 million votes. 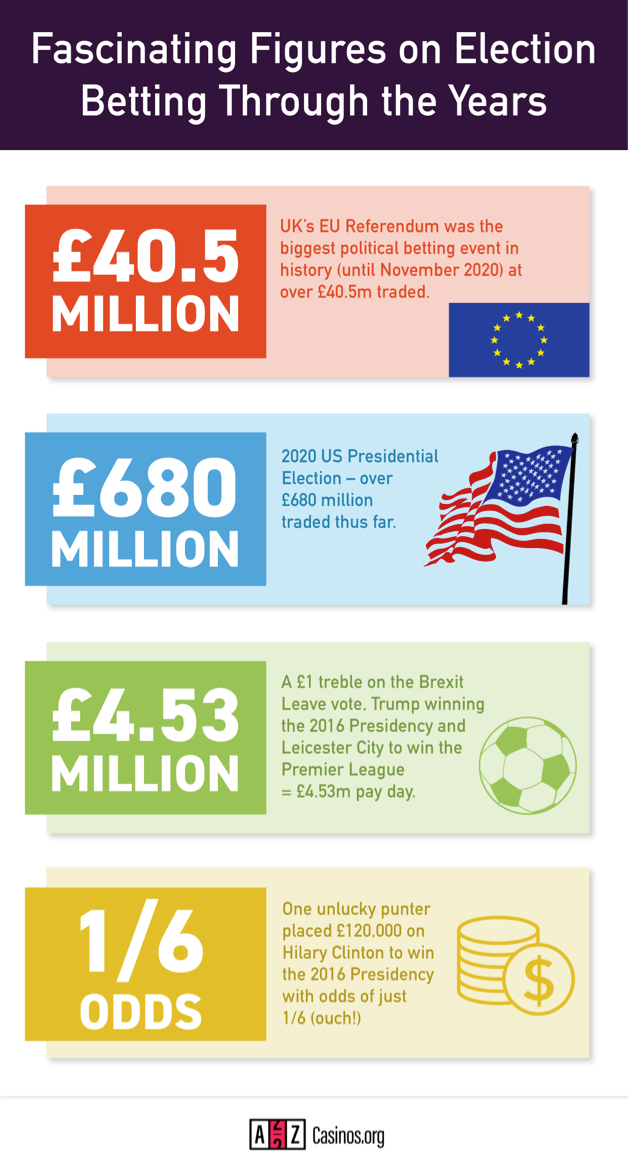