Features What Are The Odds Of Winning At Clue?

What are the Odds of Winning at Clue?

Whether you’re a huge fan classic board games or simply enjoy the nostalgia of childhood pastimes, the game of Clue still has the power to spark excitement and drama among a group of friends. It remains the world’s most popular ‘whodunnit’ mystery game to this very day.

The origins of the game are also quite interesting. It was originally titled Murder! by English inventors Anthony and Elva Pratt, a married couple who conceived the idea for the game back in 1943 whilst hiding out in air raid bunkers during the German attacks on Great Britain throughout World War II. More than just a spot of fun, the game was a vital distraction from the terrible events that were occurring above ground at the time.

Following the end of WWII, the couple decided that their game had plenty of potential beyond the initial air raid distraction as a form of family-friendly entertainment. They eventually managed to sell their idea to Waddington’s, a leading card and board game retailer based in the city of Leeds, in 1947. The game was quickly rebranded as Cluedo – a combination of the word ‘clue’ and the Latin word ‘ludo’, which means ‘play’. This was then shortened to Clue for the North American market. Either way, it certainly sounds less threatening to children’s ears than Murder! that’s for sure.

Yet anybody who has played Clue on a regular basis will have most likely considered the odds at actually winning the game, whether on the very first turn or otherwise.

What we know so far

Okay, so first let’s start with the basics. Clue is a 6-player game that centers around the premise of a murder of a man named Mr Boddy which has recently taken place in a mansion. The objective is to discover the murderer, the murder weapon and the room in which the murder actually occurred. The answer (in the form of 3 missing cards) is hidden in a confidential envelope at the start of the game.

Each player is given a checklist that lists every possible suspect, weapon and room, with the idea being that players gradually mark off all key bits of information as new clues are revealed. By whittling down information that is not they can get closer to the source of the crime.

You don’t need all six players to play the game, although at least three are required. Of course, the number of people playing the game will impact the probability of winning by some degree. For the remainder of this article, we will assume all 6 players are playing the game, unless otherwise stated.

In a standard game of Clue, there are a total of 6 suspects, 6 weapons and 9 rooms. It’s tempting to say that each player has a simple 1 in 6 chance of winning the game but, unfortunately, things get a little more complicated than that when we consider the number of potential card combinations and dice rolls involved.

Instead, let’s begin our probability analysis with the theoretical counting principle, which basically means if one card is drawn from each pile, how many possible situations could have resulted in the death of Mr Boddy? By multiplying the number of suspects, weapons and rooms together, we know there are 324 possible outcomes. We may, therefore, assume that there is a 1 in 324 chance of guessing the correct answer on the first turn.

But that’s not quite the full picture. We must also consider that, after the initial 3 cards have been removed and placed in the envelope, there are then 18 cards left to distribute among the 6 players, which means each player receives three additional exclusions. The relative probability of guessing the right answer straightaway really depends on which specific 3 cards a person receives.

So, how many different ways can these cards be distributed between the players? Remember, we are still assuming that all 6 characters are actively being played in the game.

The answer, perhaps unsurprisingly, is quite a few! A combination analysis of 18 cards distributed between 6 players results in over 18,000 possible combinations with regard to the exact three cards each player will receive – 18,564 in fact.

The best-case scenario is a situation where the player holds a hand consisting of either all suspect cards, or all weapon cards. This gives the player a 1 in 162 of making the correct accusation. But wait a second, what about the dice? 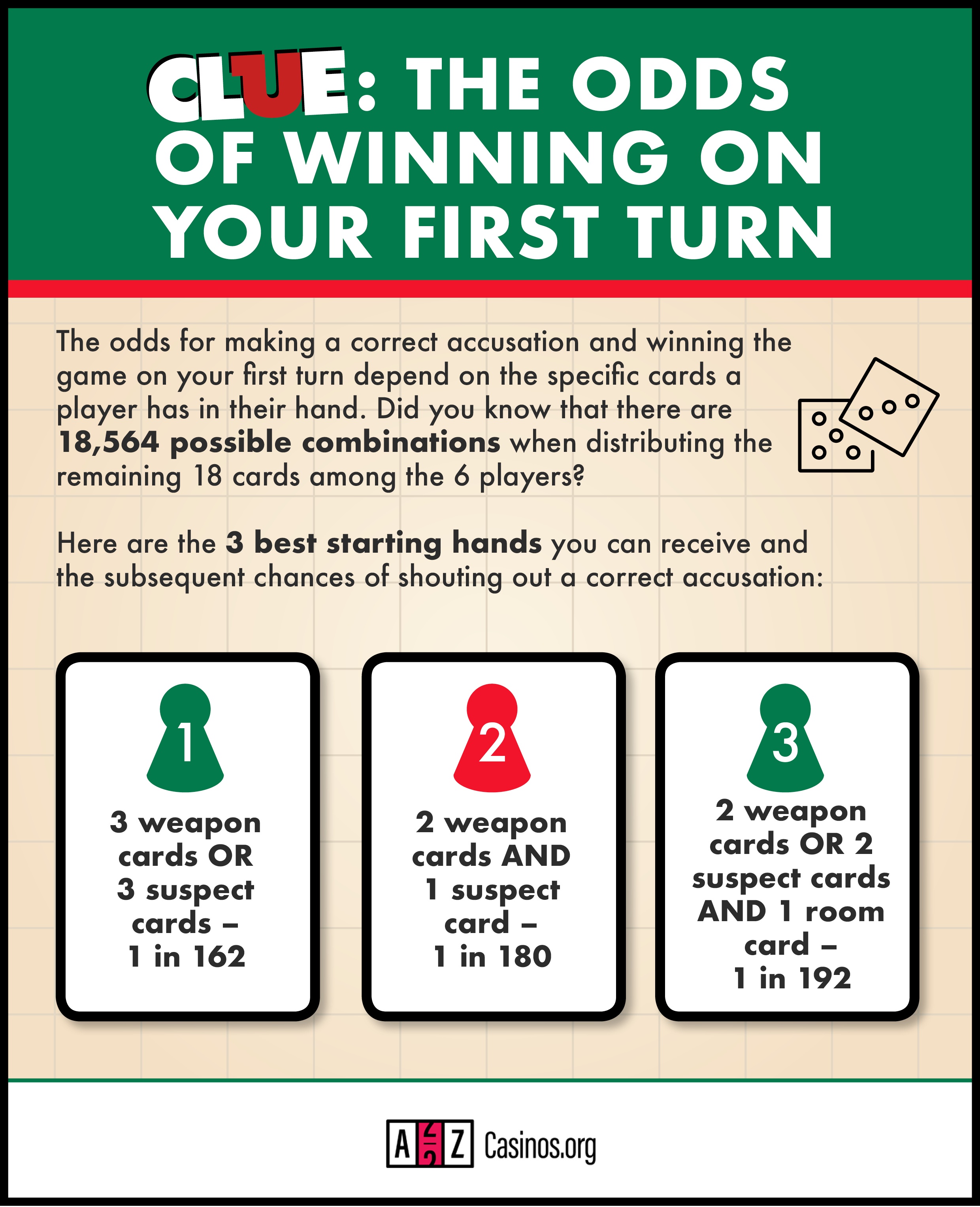 Now, we move into the realm of theoretical probability. Let’s say you are Mrs Peacock; what is the probability that you will get to enter a room of the very first throw of the dice? This is assuming she is still on her designated starting spot and hasn’t been summoned to any other room by another player. Is this higher or lower compared with other players?

The game is played with 2 dice, meaning that the maximum number of moves in one turn is 12. Looking at a standard board, there are three different rooms in which Mrs Peacock can enter on the first turn: the Conservatory (6 moves), the Ballroom (8 moves) and the Billiard room (9 moves). We work out the probability as follows, assigning two numbers based on all potential rolls of the dice:

There are 21 possible combinations in total, 15 of which would allow Mrs Peacock to enter a room on the first roll. This works out to a 71% chance – the best of any character. This gives the person playing Mrs Peacock a slightly better chance at winning. 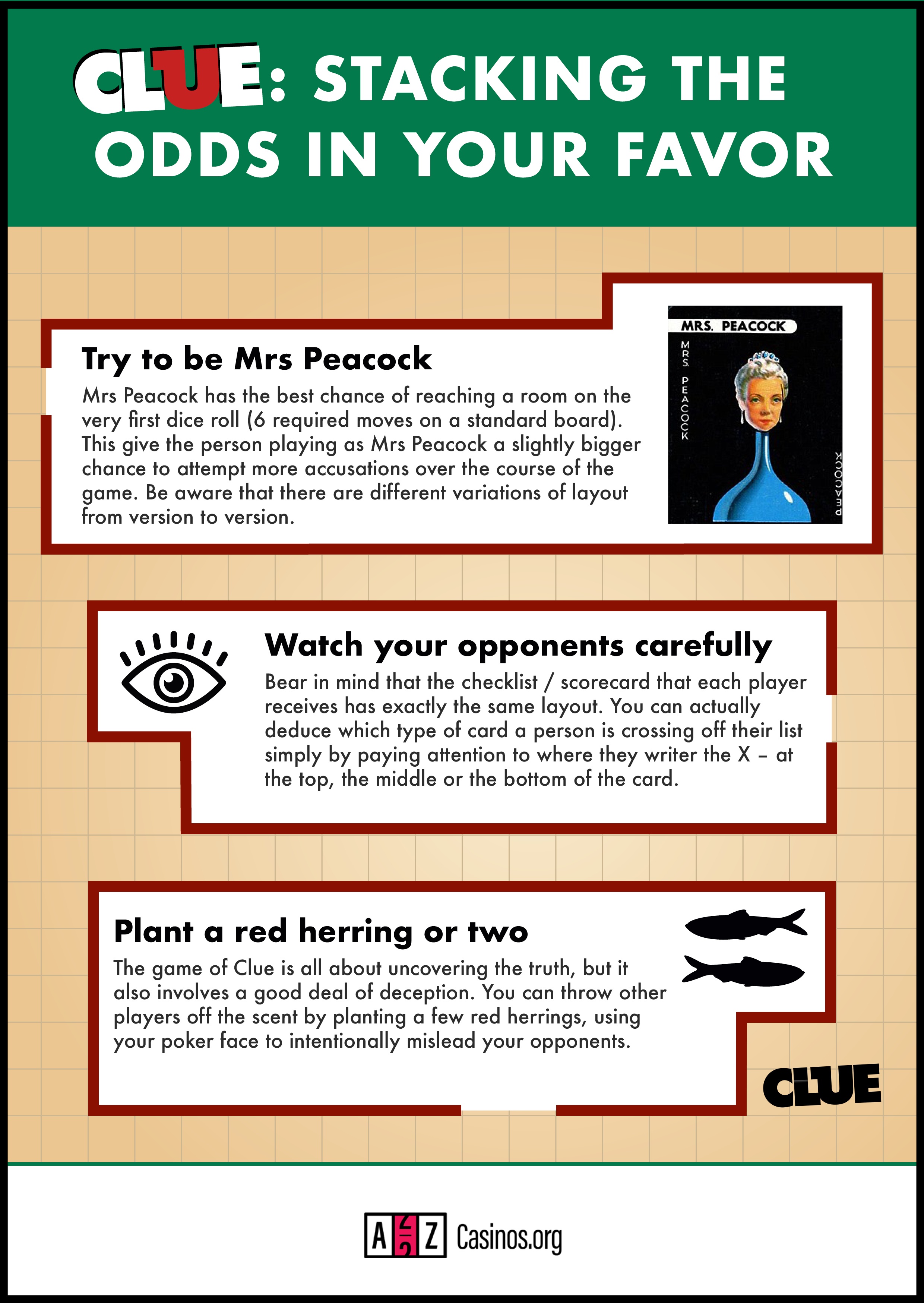 Is the game fair?

The nature of the game means that, as more information is revealed to each player, the better the odds they have of making a winning accusation. It’s entirely a case of process of elimination. However, the different forms of probability analysis listed above also show that there are various advantages (both likely and unlikely) that can aid a player in making a correct accusation sooner rather than later.

That said, the sheer scale of combinations involved in which cards are distributed among the 6 players is certainly high enough to assume that luck and chance play a far bigger role than any character bias. This makes the game completely fair (and indeed fun) to play, no matter which character you end up with!