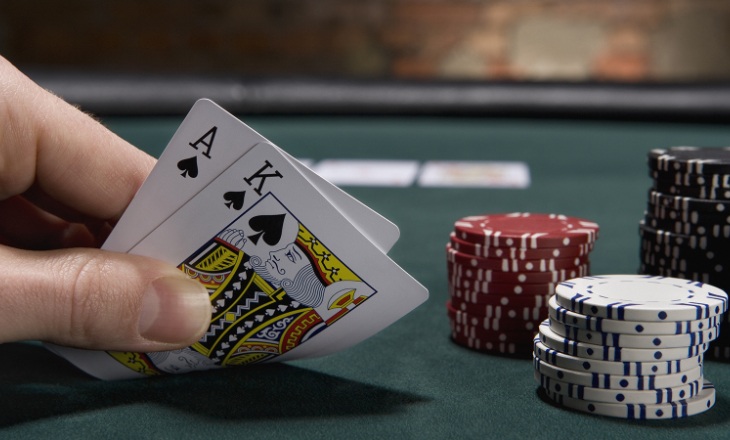 Blackjack has been the most popular table game in American casinos since the 1960s, when it surpassed craps.

There's good reason for the its popularity. Players who know how to look for the best games and who know when to hit, stand, split pairs and double down get a shot to win that ranks among the best available.

It's rare that online players can get a mathematical edge on blackjack, as card-counting experts can do in live casinos. That's because in most online games, cards are electronically shuffled after every hand, taking away the imbalance in deck composition that favor players.

Card counting becomes a factor online only if the casino streams a feed of a live dealer, who reshuffles only after a proportion of cards are dealt. American casinos don't offer such games at this point, and the games aren't common even in online casinos overseas.

Instead, images of cards appear on your screen, with values driven by a random number generator. The RNG does nothing but generate numbers. Those numbers are then mapped onto specific cards. An instant shuffle is possible for every hand, so most often, you're playing with a freshly shuffled deck.

Nonetheless, players b master basic strategy can reduce the house edge to half a percent or so, and sometimes even a tenth of a percent or less in game with favorable rules.

There are basic rules of blackjack used in all casinos, along with optional rules that may vary from casino to casino.

Let's look at the basics first.

Cards are dealt from 52-card decks, though packs of multiple decks are common. Online casinos sometimes shuffle together one, two, four, six or eight decks. Some tell you onscreen how many decks are in play. Others do not, but with extended play you can deduce if more than one deck is being used. If you see a hand where two 3s of diamonds are dealt, you know it's not a single-deck game. Single decks have only one card of each denomination per suit.

Online players receive two cards face up. (Note: In one- or two-deck games in live casinos, player cards are sometimes dealt face down). The dealer gets one card face up and one card face down.

After seeing their cards plus the dealer's up card, players have four basic options:

If your total exceeds 21, you bust and lose. If you have 21 or less and have a higher total than the dealer, you win and are paid even money, Exception: If you have a two-card 21, or blackjack, you're paid at 3-2 odds at most tables, though some pay only 6-5.

If you and the dealer have the same total, you tie, or push, and get your money back. There's an exception here, too. A dealer blackjack stops the hand and all player bets lose except player blackjacks. They push.

That brings us to one more option that's common to most blackjack tables.

If the dealer has an Ace face up, you may then make a bet half the size of your original. If the dealer has a 10, Jack, Queen or Ace face down to complete a two-card 21, you are paid 2-1 on your insurance bet. The effect is that you win the same amount on insurance as you lose on the main hand.

If you have a blackjack and take insurance, you win an amount equal to your original bet no matter what the dealer has face down. That's called "taking even money."

Here are some frequent options:

That's because each card removed has a greater impact with fewer decks. If you start a hand with an Ace, then in a single-deck game 16 of the other 51 cards, or 31.4 percent, are 10-value cards that would complete a blackjack. In a six-deck game, 96 of the remaining 311 cards, or 30.9 percent, are 10 value cards.

Because of that effect and similar math when you start with a 10 value, blackjacks are more frequent with fewer decks. You collect a 3-2 payoff on blackjacks in most games, while the house collects only even money on dealer blackjacks, so more frequent blackjacks favor players.

If all other rules are equal, a single-deck game has a house edge about half a percent lower than a six-deck game.

Dealer hits or stands on soft 17:

Some tables have the dealer stand on all 17s, including the softies. Others require the dealer to hit soft 17.

It's better for players if the dealer stands on soft 17. That's because 17 is not a winning hand if the player makes 17 or better. Unless the player busts or stops short of 17, the best a dealer 17 can do is push a player 17.

Hitting soft 17 increases the house edge by about two-tenths of a percent.

It's best for players to have more options as long as the players take their time to learn basic strategy and know how to use the options.

Most often, you'll be given the chance to double down after your first two cards, no matter what they are. If the casino permits double downs only on hard totals of 9, 10 or 11, that increases the house edge by about a tenth of a percent. If it restricts doubles to hard 10 or 11 -- eliminating the 9 as well as all soft totals -- it increases the house edge by two-tenths of a percent.

For example, if you make a second bet to split a pair of 8s and start each of two hands with an 8, then draw a 3 to one 8 for a total of 11, you want the chance to double down. If the casino doesn't permit that play, the house edge increases by .14 percent.

Players may split pairs, once, twice or three times

If you split a pair of 8s and then draw a third 8, creating another 8-8 hand, your best play is to split again. If the casino doesn't allow resplits, it increases the house edge.

Commonly, players may split Aces only once and get one more card atop each Ace. That's normal and nothing to fret about. But should you find a casino that allows you to resplit Aces, it decreases the house edge by eight-hundredths of a percent.

This is a fairly rare option, but when available, it helps players cut the house edge.

There are other optional rules such as player wins on all blackjacks, five cards under 21 win against all dealer totals, 7-7-7 pays a bonus and more. But these are extraordinarily rare in mainstream blackjack. They're usually reserved for blackjack-based games such as Spanish 21 and Super Fun 21, which have their own basic strategies.

With the exception of 6-5 pays on blackjacks -- a rule players should avoid -- no one rule has a large enough effect to make a game good or bad all by itself.

Combinations of rules must be evaluated.

As an example, let's take a single-deck game in which the dealer hits soft 17, players may double down on any first two cards, may double down after splitting pairs and may split pairs up to three times. The house edge against a basic strategy player is tiny, about .046 percent in a continuously shuffled game.

If you apply the same rules to a continuously shuffled six-deck game, the house edge rises to .62 percent. Fewer decks make all the difference with equal rules.

But what if rules are not equal? Imagine a casino offers a single-deck game in which the dealer hits soft 17, you can double down only on hard 10 or 11, may not double after splits, and may split pairs only once. With a continuous shuffle, as in most online games, the house edge against a basic strategy player is .48 percent.

Now you have a choice of playing a six-deck game in which the dealer stands on all 17s, you may double on any first two cards, including after splits, and may split pairs up to three times. The house edge on that game is .41 percent.

In that example, the six-deck game is better for players than the single-deck game. It's the entire set of rules, rather than any one specific rule, that makes the difference.

For every video poker hand, there is a play that gives you the best average results. You won't always win making these plays, but you'll win more often than if you don't make them.

In total, these plays are called "basic strategy." Basic strategy was invented by four analysts who were serving in the U.S. Army in 1953 at the Aberdeen Proving Ground in Maryland. Known by blackjack players as "the Four Horsemen," Roger Baldwin, William Cantey, Herbert Maisel and James McDermott didn't have access to computers. Their own brainpower was augmented only by desk calculators.

Basic strategy can be broken into three sections: strategy for hard totals, strategy for soft totals and strategy for pairs. It tells you whether to hit, stand, double down, split, or, if available, surrender. Listed strategies apply regardless of how many cards are in your hand; it's best to make the same play with 14 regardless of whether it consists of 9-5 or 3-4-7. The exception is that you can double down only on the first two cards, so basic strategy also tells you whether to hit or stand with three or more cards.

In a soft hand, where Aces are counted as 11, you can't bust in a one-hit. That makes a big difference in strategy. You'd never hit hard 12 against a dealer's 6, but you do hit soft 13, knowing that a 10 won't bust you at 22, it would just turn the hand into hard 13. So you take a chance at improving the hand.

That leads to these strategy plays:

Most strategy differences for splitting pairs are driven by whether you're permitted to double down after splits. Let's take a look.

You'll not often find the option to surrender half your bet instead of playing out the hand and risking losing the full bet. If you do, here's the strategy that helps cut the house edge:

Learning to recognize tables with good rules, choosing favorable games and mastering basic strategy are important steps toward cutting the house edge to the bone.

You can trim the house edge into the tenths of a percent, depending on the quality of game and your own skill. The shuffle-after-every hand nature of online blackjack means skills to get an edge, such as counting cards, can rarely be used, but you can improve your shot to win by mastering the basics.

A Beginners Guide to Quick Hit Black Gold - How to Play

How to Play Quick Hit Pro