In our endless quest to make sense of the world around us, we have an irresistible urge to sort things into numbers. Nowhere is this urge more apparent than in the proliferation of top 10 lists that fill much of the internet and continue to be shared across our social media feeds on a daily basis.

When companies are creating marketing content for the web, they often prefer to present such content in the form of top 10 lists. They do this because research has shown time and time again that doing so makes people much more likely to click and read.

Simply typing in the words 'top 10' into Google will throw up an unfathomable range of suggested search terms. "Top 10 rich people", "top 10 songs", "top 10 dog breed", "top 10 wireless headphones", the list goes on and on. 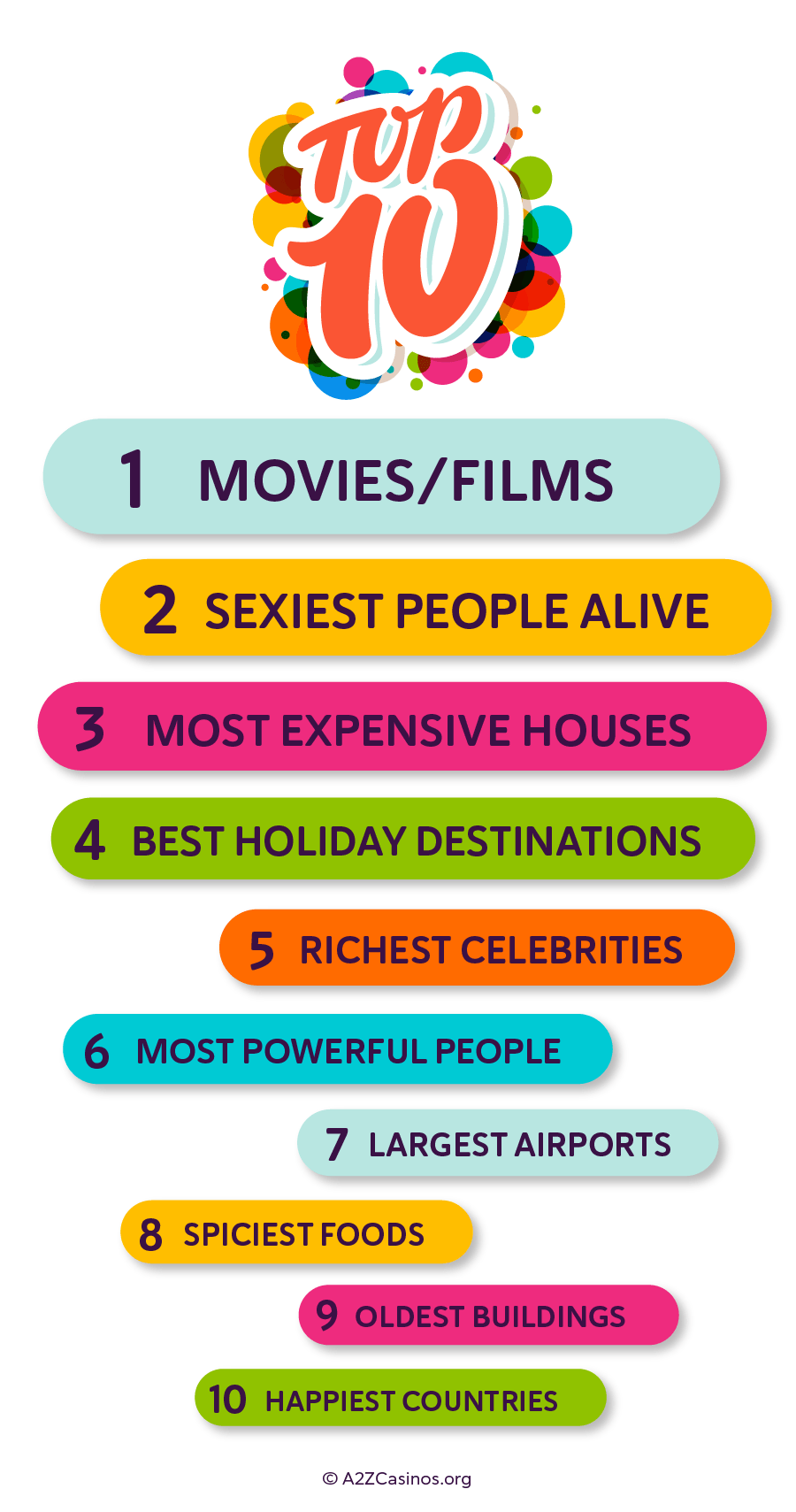 But why do we love top 10 lists so much, and what are the best top 10 lists out there right now? Read on to find out.

Why We Love Top 10 Lists

Top 10 lists on so ubiquitous on the internet, in books, in film, and in print media because we, as audiences, are drawn to them. In order to explore this phenomenon in greater depth, what better way to explain why we love top 10 lists than with a top 10 list?

1. They bring a sense of order to the world around us.

One of the main reasons we like lists is because they can take vast, seemingly unknowable topics such as literature, music, or politics and turn them into easily digestible listicles. As David Wallechinsky, author of the bestselling book;The Book of Lists puts it so succinctly; "People are attracted to lists because we live in an era of overstimulation, especially in terms of information".

2. They make things easy to remember.

A top 10 list has been proven to be incredibly effective at helping people remember by heart certain pieces of information that they never would have done on their own. The numbered categorisation and the seemingly digestible format of top 10 lists are the reasons why educators of all levels have incorporated them into the curriculum for decades now.

3. They make us feel in control.

As mentioned, top 10 lists bring order to chaos. Beyond simply making sense of topics, the ability to put any manner of subjects into a subjective or objective ranked list makes us feel like we have control over it. It is this same logic that drives CEOs and successful businesspeople to divide their days into clearly divided to-do lists that they can tick off as they go along.

Chances are when you saw the title of this article, the 'Top 10' part immediately grabbed your attention. There is a wealth of marketing research that highlights just how effective the Top 10 list is at directing the eye of the reader and convincing them to click. While there are many possible reasons for this, the most compelling is that we are lazy creatures, and will automatically assume a top 10 list will be an easy read full of plenty of interesting information.

5. They help us get things done.

Lists are more than just rankings, they can also function as a set of goals. As any management consultant will tell you, breaking down a task into smaller, easily completed mini-tasks makes it much more likely that it will actually get done. Top 10 lists are popular because they help us to refocus our minds and eliminate needless procrastination (unless of course, you end up wasting hours scrolling through top 10 articles instead of doing your work).

6. They can launch a career.

We have no doubt in our minds that top 10 lists are highly salient and shareable pieces of content. Therefore, it is unsurprising that simply creating one can launch a career. Figures such as Martha Steward, Benjamin Franklin, and Roger Ebert have all made their own immensely popular top 10 lists in their lifetimes, attracting new audiences and distilling their ideas and personal brands into a single entertaining article.

7. They can bring niche topics to our attention.

Have you ever wondered what the top 10 most biologically diverse coral reefs are? Or perhaps what constitutes the top 10 most dangerous office jobs in the world? There are top 10 lists for even the most niche topics you could think of, all of which are worthy of attention. What's more, top 10 lists can also shine a light on people who truly deserve your attention who might otherwise not have gotten it via lists such as "the top 10 up-and-coming artists of 2020" or "the top 10 human rights lawyers you need to know about".

8. They can evoke a lot of emotions.

Even the most methodically compiled top 10 lists are rarely made up purely of facts. As such, everyone will have an opinion about a top 10 list and there is no shortage of top 10 lists that have famously caused controversy. One example might be the newspaper; The Guardian's annual end-of-year top 10 lists, which rank the top 10 albums, books, and films according to the culture editor. The publication of such lists always ignites a storm of debate on social media, which, naturally, drives up engagement and clicks.

9. They are perfect small talk fodder.

As we have mentioned, the beauty of top 10 lists is that they make complex and fascinating topics easy to remember. Being able to recall the top 10 best national parks in the UK or the top 10 news stories of 2019 will do wonders for your small talk skills, which is always a good thing.

10. They are a blend of fact and opinion.

Even a top 10 list that appears to be a purely scientific ranking such as "the top 10 richest countries on Earth" is a subjective list, owing to the many, many different ways that such a ranking can be calculated. Put simply, top 10 lists are often more a reflection of the author than of the topic they are writing about, which is one of the reasons why we engage with them so much.

The Most Popular Top 10 Lists

Streaming giant Netflix took Hollywood by storm when they started producing their own original movie content. A testament to their success is the regularly updated list of their top 10 most-watched films ever, available on their website. As of 2020, that list include;Extraction;Bird Box;Roma, and The Irishman, which have hundreds of millions of views between them.

TopTenz.com is one of the oldest and most popular listicle sites in the world. Every year they update their page which lists their most popular top 10 articles according to page views. Right now it's a 2008 article titled 'Top 10 Comic Book Villains", which has thousands of shares and lists Lex Luthor and The Joker as the top baddies.

People have a morbid fascination with crime, and the Federal Bureau of Investigation's list of their top 10 most wanted fugitives is essentially a who's who of the biggest baddies around. Anyone can view the site to see who is on the FBI's radar right now.

People has been running their Sexiest Man Alive rankings for decades now, in which they round up the hottest male celebrities and public figures before crowning one of them as the sexiest one alive right now. Last year it was singer-songwriter John Legend, and previous contenders have included George Clooney, Idris Elba, and Matt Damon.

To have a book of your own make it to the New York Times's bestseller list is to have reached a pinnacle of success as an author. Therefore, it is unsurprising that NYT is still the go-to resource for what to read, with the newspaper's book review section publishing their favorite reads of the year every December via a top 10 list that is read by millions of people.

Listverse is another one of those sites that have garnered tens of millions of clicks simply by publishing their own clickbaity top 10 lists. They too have released their most-read listicle ever, and the result is somewhat morbid. The article is a list of the top 10 most fascinating 'last pictures' ever taken, meaning that last ever photos taken of certain people, buildings, and places before they ceased to exist.

Rolling Stone remains the number one global authority on what's hot and what's not in the world of music. Therefore it should not come as a surprise that their definitive ranking of the top 10 albums of all time, which includes: Sergeant Pepper's Lonely Hearts Club;and Highway 61 Revisited on the list, remains a widely read and widely discussed top 10 list.

Buzzfeed arguably has done more than any other publication to popularize the listicle and has garnered literally billions of clicks from their relatable, social-media friendly top 10 lists. Their most-read top 10 list ever, according to Buzzfeed's website, is "Top 10 Crazy Texts from Parents", which is a collation of hilarious text messages from worried or angry parents to their kids.

TripAdvisor is the world's largest travel review site, where millions of people come together to rank hotels, airlines, restaurants, and attractions. The TripAdvisor team also releases their own curated lists every year, with the most popular being their list of the top 10 destinations in the world. This year includes London, Paris, Bangkok, and Seoul.

Finally, there is the film critic review aggregator site Rotten Tomatoes, which compiles ratings of films based on what the critics have to say. You can also head to their website to see which films have the highest amounts of critical acclaim ever, which is currently topped off by Black Panther, Avengers: Endgame, and and Us.

Top 10 Lists You Have Never Heard Of 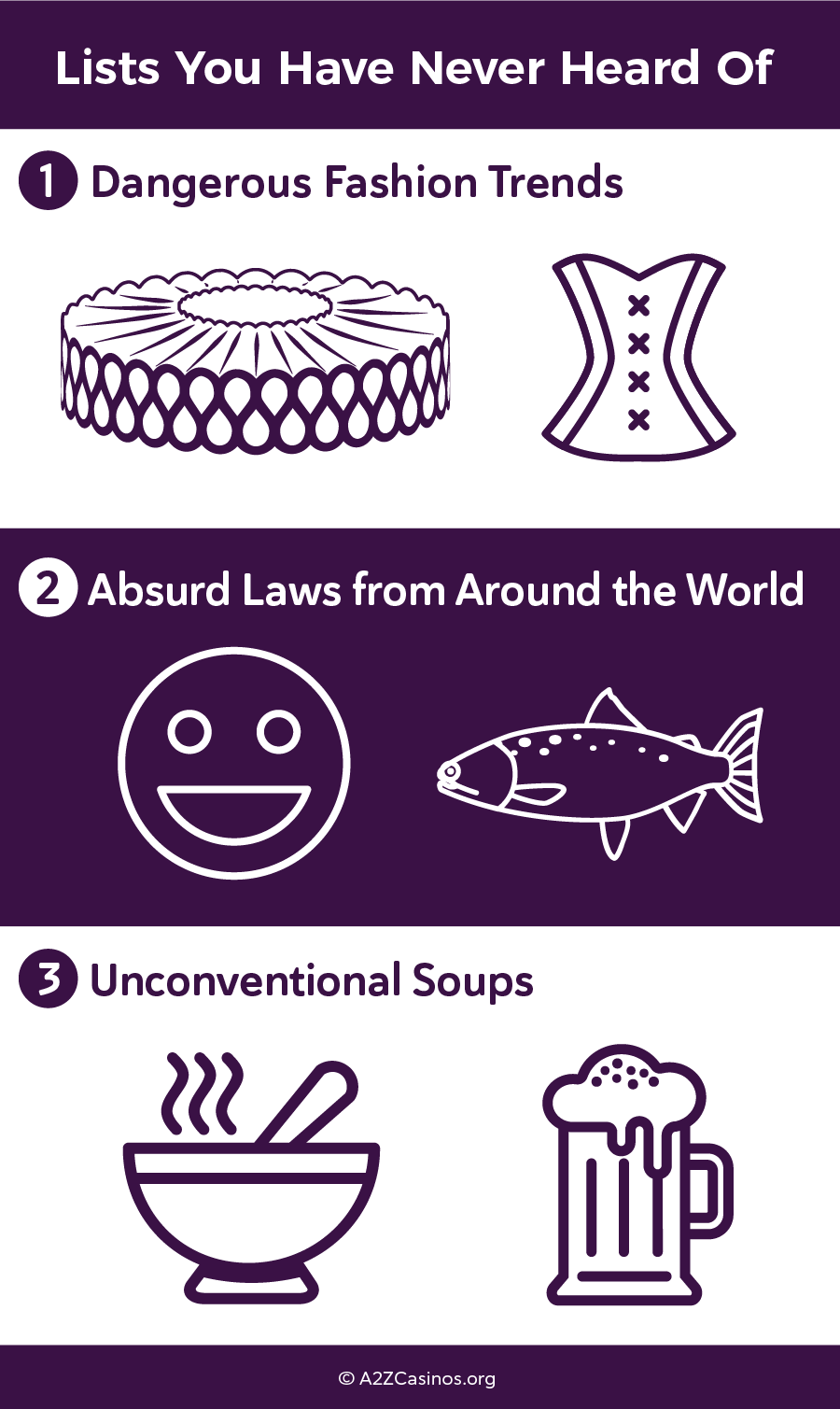 Let's end this article with a different kind of top 10 list. This time, we've rounded up some of the weirdest, inexplicable, and most niche top 10 lists out there. All of these lists are real and freely available online, by the way.

As you can see, there really is a top 10 list for everything! As long as the internet keeps publishing them, we'll keep reading them.