Features The Odds Of Meeting A Doppelgänger, Murderer, And Soulmate

The Odds of Meeting a Doppelgänger, Murderer, and Soulmate

As much as some of us might like to think otherwise, the universe is a random, unpredictable place where very little is actually within our control. When it comes to our careers, love lives, social circles, and more, it all falls down to a game of chance.

Think of all of the people in your life that you would never have met if you hadn't ended up in the exact situation where you met them in at that exact time. Think of all of the opportunities you have had that were the result of a chance encounter, or an overheard conversation.

We like to think of ourselves as masters of our own destiny. The truth is that the odds of the universe play a significant role in the directions that our lives take. To illustrate this point further, let's consider some very specific chance encounters.

Let's say you want to know how likely it is that you will bump into your doppelgänger or your soulmate. You might think that it is impossible to calculate the odds of doing so, but you'd be wrong. The universe might be a very random place, but that doesn't mean that some of its best and brightest haven't tried to quantify exactly how random it actually is. 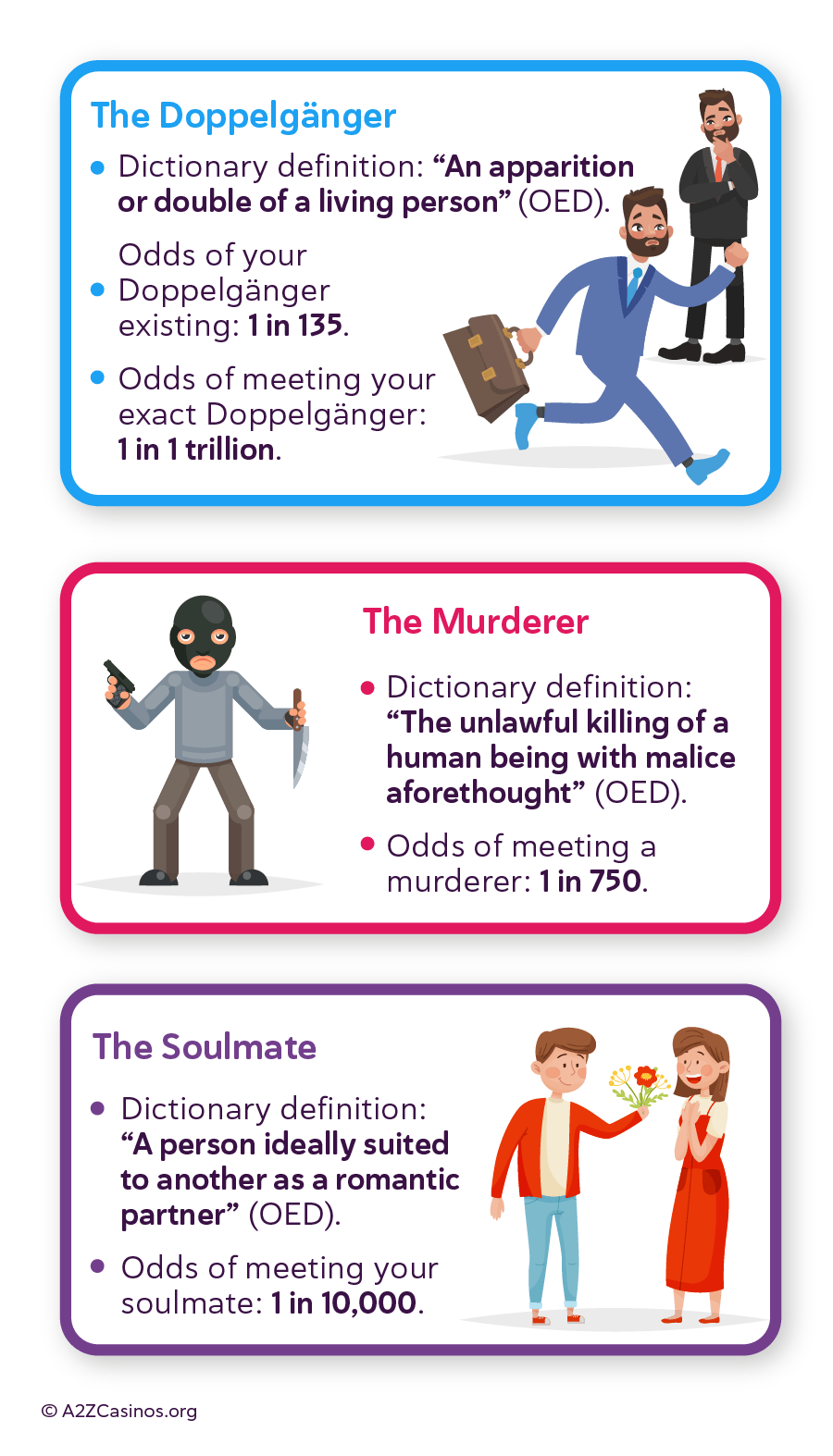 With that in mind, let's take a look at three chance encounters you might experience in your life: meeting your doppelgänger, meeting an actual murderer, and meeting your soulmate. Using odds calculated by some of the greatest mathematical minds out there, we'll tell you exactly how likely it is to encounter these people in a universe that is chock-full of chance encounters.

Odds of Meeting Your Doppelgänger 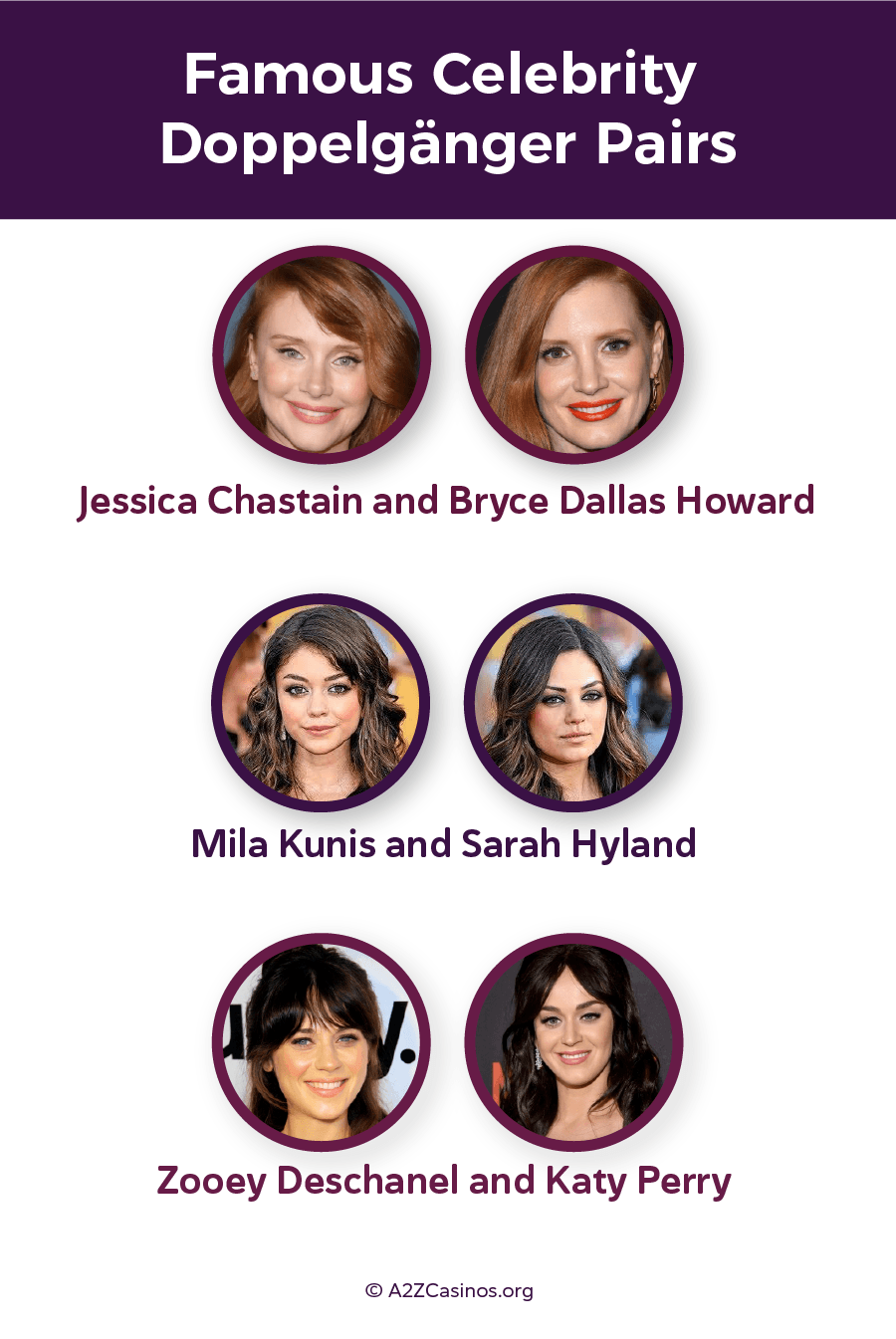 Have you ever wondered if there is someone out there in the world who looks exactly the same as you, but is not biologically related to you in any way? Some might think it is a scientific impossibility, but they would be wrong.

According to research published by the BBC, there is precisely a 1 in 135 chance that an exact pair of doppelgängers exists somewhere in the world. To put this into perspective, this means that there is currently a 0.7% chance that there is someone in the world right now who looks exactly like you but has no relation to you whatsoever.

But what are the odds of you actually bumping into this person by chance? It turns out the number crunchers have been hard at work calculating those odds too. Right now, the odds of you finding someone with the exact same key facial features as you stand at one in a trillion, not exactly the most comforting odds for those hoping to find their clone.

Despite the actual odds of you bumping into your doppelgänger seeming to be vanishingly rare, it is certainly not impossible. There are countless examples on the internet of people bumping into their exact doppelgängers on planes, at parties, at shopping centres, and just walking down the street.

There has even been a proliferation of "find my doppelgänger" websites in recent years, that allows people to hunt for their own double and share the experience with the world once they find them. You don't even need to look very hard to see the clear existence of doppelgängers in the world today - just look towards Hollywood.

The phenomenon of celebrity doppelgängers is a well-documented one that has been the fodder of gossip magazines for over a century. Today, there are countless celebrity pairs that are almost impossible to tell apart. There are the red-headed actresses Jessica Chastain and Bryce Dallas Howard. There is the Black Swan star Mila Kunis and Modern Family actress Sarah Hyland. There's Zooey Deschanel and Katy Perry. The list goes on and on.

So, is your body double out there in the world somewhere? While the chances of a doppelgänger actually existing aren't too slim, the chances of you meeting them certainly are.

If you believe that your double is out there and you want nothing more than to get a legendary selfie with them, you can always head to "find my doppelgänger" sites and post a pic of yourself, in the hopes that your doppelgänger stumbles across it.

Beyond this, there is very little that you can do to force an encounter with your double. All you can do is keep your eyes peeled and hope that one day, the universe throws you a bone.

Odds of Meeting a Murderer

Now let's look at something a little bit more sinister. All of us have wondered from time to time whether we have been in the same room as, or even gotten to know, a hardened criminal. But what about the very worst crime of them all, murder?

Few of us would ever stop to think that we have met a murderer before, but it turns out this is actually a fairly likely scenario. Let's first break down the odds and numbers to calculate just how many people in the crowd on the street could actually be murderers.

We'll start with a rough global population estimate of 7 billion people. The worldwide annual total of murders last year was 661, 500 people. Of course, it's worth noting that the actual number of murders worldwide was probably much higher, given the huge number of murders that are never actually recorded as such.

The global murder rate is around 7 per 100,000 people, but there are huge variations depending on where you are in the world. If we keep in mind that less than 0.01% of all murders are serial offences, then that means that we can largely equate the global murder count with the global number of murders, give or take a couple of hundred.

Then there are other factors to consider beyond the actual total number of recorded homicides, such as estimates by psychologists that 6% of all humans would kill another person for a reason other than self-defence. Then there are localized studies such as a recent study in the US that revealed that 40% of murderers do not get caught. All of this means that, actually, there are quite a lot of murderers walking among us.

It is these factors which have let certain number crunchers to calculate that, in your lifetime, you are likely to walk past at least 16 murderers, providing that you live in an average-sized city. Some estimates even say that we walk past 36 murderers in our lifetime.

But what about actually meeting a murderer, rather than simply passing them on the street? Some researchers have put the odds of meeting a murderer at 1 in 750. There is also a wealth of anecdotal evidence to suggest that it is far from impossible that you will one day meet a murderer if you haven't already.

Countless people have shared their stories of close encounters with some of the world's most sinister murderers, often only realizing how close they had come to potential death after the person they met had been arrested.

One famous example is Pam Prine, who had a close shave with death when serial killer Ted Bundy asked if she could use her umbrella to walk him to his car during a rainstorm. Bundy's modus operandi was to lure unsuspecting female victims to his car in isolated places, but in the days before Bundy's global notoriety, Pam Prine had no idea. Only after walking several blocks to an isolated part of town did she realize that something might be wrong. Bundy saw the look of concern on her face and tried to grab her, prompting Prine to flee to safety.

Another, perhaps more unsettling example involves that of the BTK, or 'Bind, Torture, Kill' serial killer. Before he was arrested and charged with more than a dozen murders in 2005, he was a popular member of his community in Park City, Kansas. Residents in his neighbourhood frequently invited the BTK killer over for dinner, parties, and family events such as weddings and christenings, with no idea what he had been doing behind closed doors.

This just goes to show, evil can be lurking right under your nose without you ever knowing.

Odds of Meeting Your Soulmate 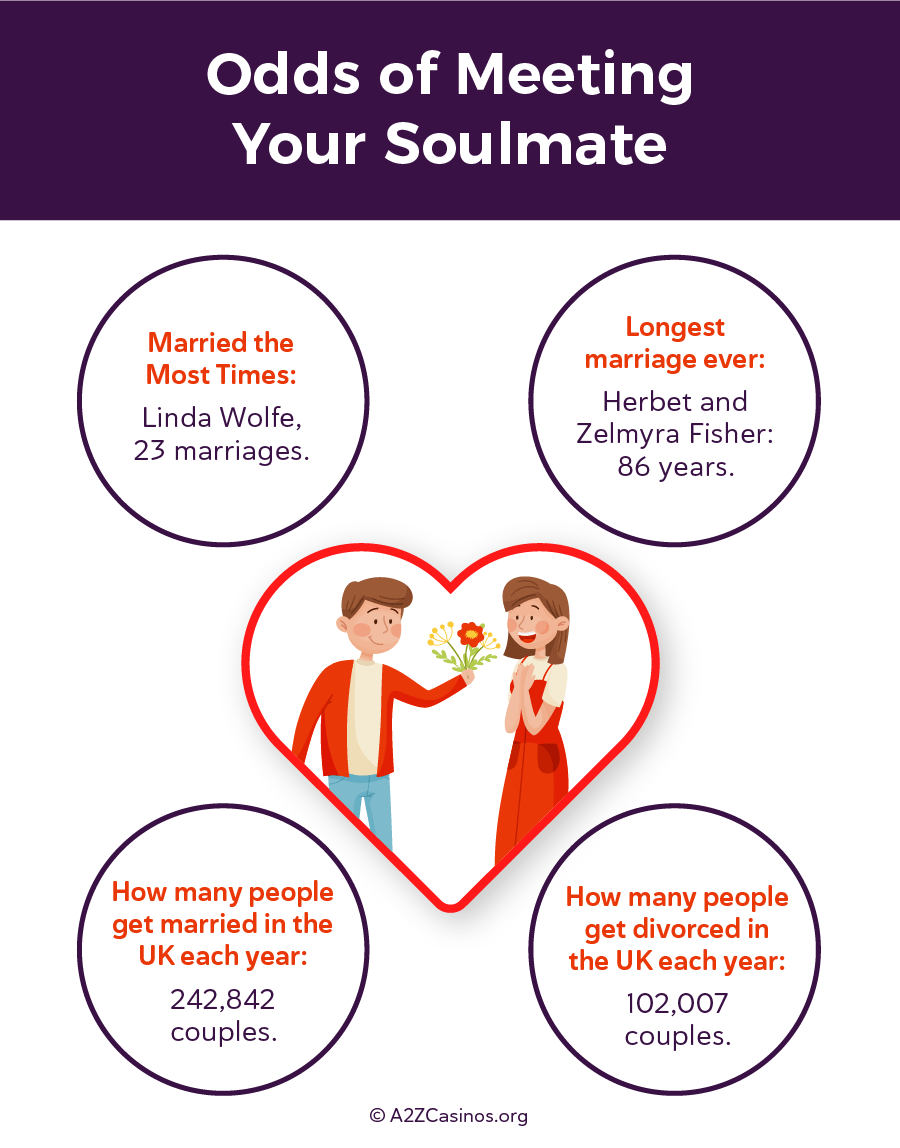 Now let's return to a more cheerful note. All of us believe that we will one day meet our soul mate, the person who we are destined to fall in love with and stay with for the rest of our lives. While the actual term 'soul mate' is a rather nebulous one, that has not stopped the eggheads from attempting to calculate the mathematical odds that you will meet yours.

Using a wide range of criteria, including the odds of entering into a lifelong marriage and the odds of finding someone that is perfectly compatible with you, also assuming that your soul mate falls within the same age bracket as you, the numbers have been crunched.

The current odds of you finding your soulmate made now stand at 1 in 10,000, or about 0.01%. Despite these apparently slim odds, a full 75% of us believe that we will meet our soul mate one day. Something is not adding up. Of course, such numbers should not deter you from trying to meet the love of your life.

Remember that around 72% of people will, on average, get married at some point in their life. Granted, around 42% of those marriages will end in divorce, at least in the UK. This still leaves a very large chunk of the population in lifelong marriages.

Of course, a lengthy marriage is not exactly a reliable barometer for the likeliness of meeting a genuine soulmate, but it should provide comfort to those who might see those 1 in 10,000 odds and might start considering giving up the hunt for true love.

At any rate, psychologists have said that the focus on soulmates and relationships that are guided by some kind of destiny is actually harmful to our long-term prospects. Believing that there is a ready-made partner out there in the world who is just waiting for you to come along glosses over the inconvenient fact that true, lasting relationships actually involve a lot of hard work.

Furthermore, if you put all of your hopes into finding your soul mate one day, you will likely not try very hard to pursue meaningful romantic relationships, meaning that you actually don't end up finding anyone. Nobody in this world is perfect, and someone who ends up being the love of your life will likely have plenty of conflicts and arguments with you. A true soulmate is someone who isn't perfectly matched to your every need and preference, but whom you love all the same.

Hopefully, these crazy odds demonstrate just how random a place the universe truly is. Although the odds might be slim, your doppelgänger, one true love, or a potential murderer could be thrown into your path by unknowable cosmic forces.